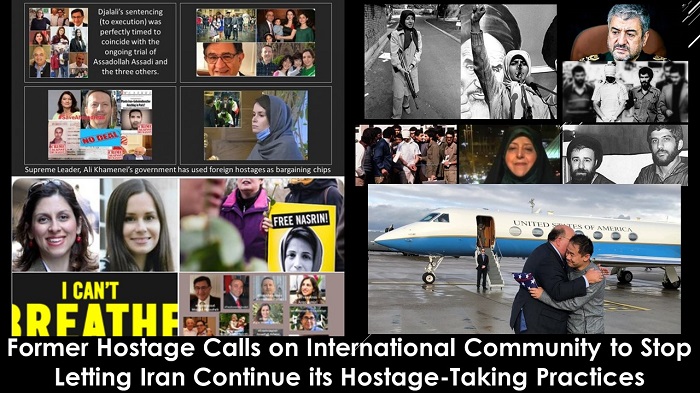 A former American hostage in Iran, Wang Xiyue, has called on the international community to work together to ensure that the regime stops holding foreigners hostage. The Iranian regime has been taking hostages for many years as political leverage.

The latest development in this respect is the Iranian regime’s announcement that it would be imminently executing Iranian-Swedish academic Ahmad-Reza Djalali.

This was alarming news and it was the regime’s way of trying to get Belgian authorities to release diplomat-terrorist Assadollah Assadi who is currently on trial in Belgium for plotting to bomb a gathering held by the Iranian Resistance the National Council of Resistance of Iran’s (NCRI), and the People’s Mojahedin Organization of Iran (PMOI / MEK Iran), outside Paris in June 2018. Mr. Ahmad-Reza Djalali used to teach in Belgium.

The Belgian Parliament reacted strongly to this news and the regime halted Mr. Djalali’s execution, proving that a firm policy is the only way to put a stop to the regime’s attempts at extortion.

In an article on Bloomberg, Mr. Xiyue said it was imperative that the regime is held accountable for its disregard of international norms.

He explained that he was released as a hostage a year ago. He went to Iran in 2016 with little understanding of the “political reality” there. He spent 40 months there, finally leaving the country with “the hard-learned knowledge that the Iranian regime is obdurately hostile toward the West, especially the U.S., and loathes diplomacy”.

Regarding the regime’s tactics of taking foreigners hostage as political leverage, Mr. Xiyue explained that it is because the regime has always got something in return when they are released. Sometimes it is financial gain, sometimes it is the repatriation of Iranian prisoners held abroad, and other times it is political concessions.

When a prisoner is released, it is often described as “diplomacy”, yet this could not be further from reality. Mr. Xiyue said that it is “in fact a manifestation of its anti-diplomacy orientation”.

In 1979, a group of #Iranian terrorists acting on the orders of regime founder Khomeini stormed the U.S. embassy in Tehran and took 52 American citizens hostage for 444 days. https://t.co/X2Del5mX9B #Iran pic.twitter.com/gOJlMzq5vY

During his time in the notorious Evin Prison, Mr. Xiyue said that it was made very clear to him that he was a “pawn for prisoner exchange”, being told by authorities that he was there so that the regime could get its “brothers back”. He said that businessmen, journalists, tourists, and academics are prime targets for the regime because they don’t have political protection and it is easy for the regime to “concoct stories against them for domestic public opinion consumption”.

Mr. Xiyue said that the international community should work together to stop this horrific practice. It should make sure that the perpetrators are held responsible and that targeted sanctions should be ramped up. Several nations, including the United States, Canada, Britain, Australia, and the European Union, should set up a multilateral agreement “to make concerted efforts against any state-sponsored hostage-taking”.

#MEK: He first took 52 American diplomats hostage for 444 days from 4 November1979 to 20January1981. This was carried out by a group of college students Followers of the Imam’s Line, who supported the #Iranian Revolution and took over the US Embassy in #Iran. pic.twitter.com/9OMZXxK3bA

He emphasized that this must mean that any future political deals should have a precondition that the regime must release all hostages and put a stop to the practice in the future.

Mr. Xiyue ended his letter saying that nobody else should have to go through the ordeal he had to endure.

Mrs. Maryam Rajavi has taken a strong stance against the Mullahs regime’s warmongering and terrorist actions across the globe. She has also repeatedly called on the U.S. and the E.U. to adopt firm policies toward the Iranian regime in order to compel them to end their human rights violations.

She called on governments across the world to recognize the right of the Iranian people and their organized Resistance Movement NCRI and (PMOI / MEK Iran), to rise up and overthrow their oppressors. Mrs. Maryam Rajavi has urged the world to allow the people of Iran to establish a free, democratic, non-nuclear Iran that need not depend on hostage-taking and terrorism for its survival.