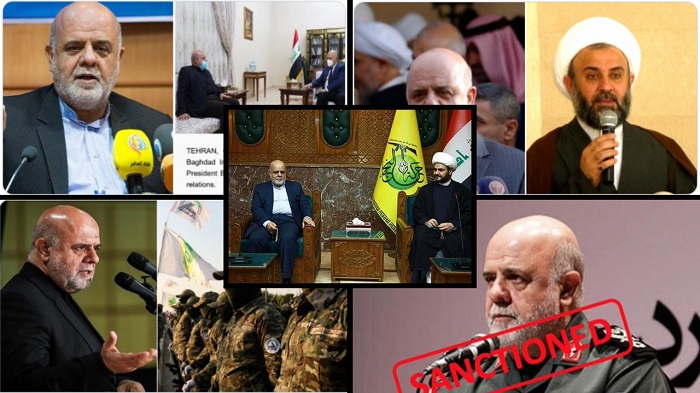 The United States Department of the Treasury has sanctioned Iraj Masjedi, the Iranian regime’s ambassador to Iraq also referred to as Iran’s “secret governor of Iraq.”

Placing Masjedi in this role shows how the mullahs’ regime is using its embassies for the purpose of terrorism. To prevent this taking place the regime’s embassies should all be closed and the diplomats expelled particularly in Iraq where Masjedi, as the regime’s ambassador, implements the regime’s aggressive policies.

Thread by @A_Jafarzadeh: Indeed long overdue. No "Ambassador" title should cover the nature of a terror master. Iraj Masjedi is one of the most veteran commanders of the IRGC and one of the first commanding organiz…… https://t.co/ULwRIkRqGb

Throughout his years of service with the IRGC-QF, Masjedi has directed a program of support and training for Iraqi militia groups which undermines the Iraqi government resulting in an increase in sectarianism, while inflicting violence on peaceful Iraqi citizen protesters.  He has also supported groups that have been accused of attacking the U.S. and coalition forces in Iraq.  The U.S. Department of State announced that it will continue to counter the Iranian regime’s destructive behavior within the region.

After 2003, Hashd Al-Shaabi (militia) was fully under the command of Iraj Masjedi as he worked closely with Mohandes who was running day-to-day operations of the Shiite militias in Iraq, before he was eliminated along with Qassem Soleimani in Jan. 2020 by the United States. 3/ pic.twitter.com/0SROGjuCpH

The National Council of Resistance of Iran’s (NCRI), and the People’s Mojahedin Organization of Iran (PMOI / MEK Iran), released an exclusive report on November 15th which revealed how Masjedi has made use of his diplomatic status to impose the mullahs’ aggressive policies in Iraq. This report exposed how the Revolutionary Guards (IRGC) Brigadier General, the IRGC Quds Force top commander acts as the regime’s “Secret governor of Iraq.”

The NCRI and (PMOI / MEK Iran), also stated that “Before his appointment as the Iranian regime’s ambassador in Iraq, state-run media outlets presented Iraj Masjedi as the senior advisor to Qassem Soleimani. Masjedi participated in the memorials of the IRGC forces killed in Syria, Iraq, and Lebanon.”

Mrs. Maryam Rajavi the President-elect of the National Council of Resistance of Iran’s (NCRI): Elimination of Qassem Soleimani and head of Iraq’s suppressive Bassij force is an irreparable blow to mullahs’ regime; Time to evict IRGC from the region.

On December 15th, 2018 it appears that when Iraj Masjedi took part in the Iraqi National Assembly and when the chairman of the session requested that participants rise to respect the Iraqi martyrs, Masjedi quickly exited the parliament. Many of the Iraqi media outlets suggested that Masjedi’s rapid exit offended the Iraqi people.

Masjedi, it has been revealed, had gone to Iraqi cities like Baghdad, Nasiriyah, Basra, Najaf, and Karbala and met up with the Quds Force’s Iraqi agents. Key names included Hadi Ameri, Abu-Mehdi Al-Mohandess, Hashem-al Moussavi, and Abu Bilal Adib, Hassan-al Sari. Using them, Masjedi led the regime’s interventionist policies and increased its influence in Iraq.

The US blacklisting of Masjedi is due to the arrested diplomat-terrorist, Assadollah Assadi, who was arrested in 2018 along with with3 other terrorists in Europe. They were attempting to bomb the NCRI and (PMOI / MEK Iran) annual “Free Iran” gathering in Paris.

The People’s Mojahedin Organization of Iran (PMOI / MEK Iran) revealed that Masjedi did a stint in the role of the third secretary in the Iranian regime’s embassy in Baghdad, Iraq. In this role, he was actively involved in the terrorist plots against the (PMOI / MEK Iran) and the coalition forces in Iraq.

U.S. Sanctions Iraj Masjedi “#Iran’s Secret Governor of Iraq;” Time To Shut Down Mullahs’ Embassies: According to the #MEK he was actively involved in the Iranian regime’s terrorist plots against the MEK and coalition forces. pic.twitter.com/UbwHe6DdM3

Recently the international media revealed Assadi threatened the Belgian authorities with terrorist attacks by the regime’s proxy groups if he is convicted. There are many groups like this in existence in Syria and Iraq.

Assadi’s threats and the recent sanctioning of Masjedi show how the mullahs’ regime uses its embassies as agents of terror and espionage. It shows why the international community should take immediate but firm action and close down all the regime’s embassies in the region and Europe and expel all the regime’s agents.