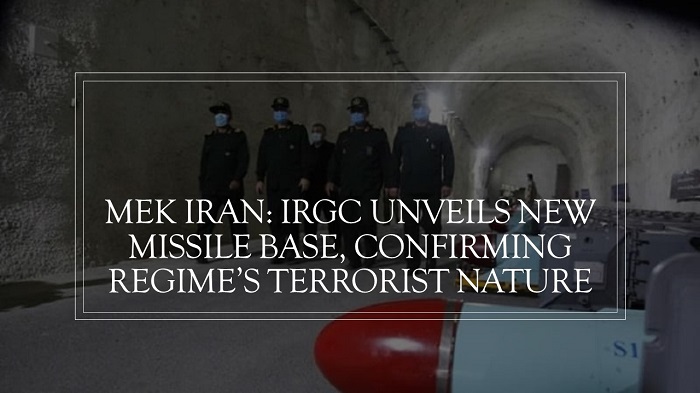 The National Council of Resistance of Iran (NCRI), and the People’s Mojahedin Organization of Iran (PMOI / MEK Iran) reported that Iran Revolutionary Guards (IRGC) Commander Hossein Salami revealed a new missile base on Sunday. Whilst over 200,000 people have died from coronavirus and millions more are suffering from crippling poverty, (PMOI / MEK Iran) and (NCRI) says “once again confirms terrorism is an inseparable part of this regime”.

They report that the regime has used terrorism to export “domestic chaos” and blackmail foreign governments since the mullahs came to power in 1979, justifying such activities as the “export of the Islamic revolution”. These actions are often undertaken by IRGC or Quds Force and have been especially prevalent in prolonging warfare in Iraq, Syria, and Lebanon.

In fact, as Reuters recently reported, Iran paid $600 million to the “Holy Shrines’ Reconstruction Headquarters” for the “expansion at the Imam Hussein shrine”, but the problem is that the Headquarters is actually an IRGC front company that hides the funding of terrorism.

Even Iranian officials admit that the regime has spent billions on terrorism in other Middle Eastern countries. Former chair of the parliament’s National Security and Foreign Policy Commission, Heshmatullah Felahatpisheh, said in May that the regime had given the Syrian dictatorship $20 to $30 billion, which no doubt helped to prolong the civil war.

Of course, Iran’s terrorism goes further than its neighbors. Their diplomat to Austria, Assadollah Assadi, is currently on trial in Belgium for attempting to blow up the 2018 Free Iran rally by the National Council of Resistance of Iran’s (NCRI), and the People’s Mojahedin Organization of Iran (PMOI / MEK Iran), in Paris, with the help of three accomplices – Amir Saadouni, Nasimeh Na’ami, and Mehrdad Arefani.

Prosecutors say that he was targeting opposition leader Maryam Rajavi, but that this would have caused great loss of life for hundreds of dignitaries and tens of thousands of resistance supporters.

Belgian authorities have provided evidence that he smuggled the explosives into Europe in his diplomatic luggage, handed it over in person to two of his accomplices, and drove back to Austria. The two accomplices were caught with the bomb in their car, whilst Assadi was arrested in Germany – where he does not have diplomatic immunity – with a notebook full of instructions for his accomplices. The prosecutors said that he was working on the orders of top-ranking Iranian officials.

Assadi refused to cooperate with the trial, claiming diplomatic immunity, and Reuters reported that he threatened Belgian authorities with terrorist attacks from “armed groups in Iraq, Lebanon, Yemen and Syria [and Iran]” if he is found guilty.