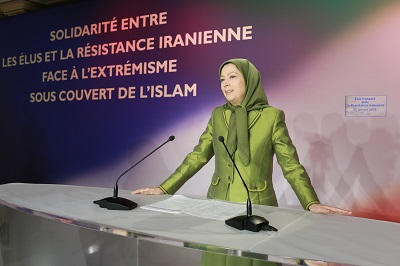 Maryam Rajavi: Hassan Rouhani is travelling to Europe to cover up the regime’s weakness and isolation. He is trying to put up a moderate face to cover up the executions in Iran and the mullahs’ role in the massacre of Syrians.

Happy New Year! I hope the New Year would be a year of progress and relief for France, a year of peace and tolerance for the world, and a year of overcoming religious dictatorship for the Middle East and Iran.

In the start of the year, let us remember all those who lost their lives as a result of extremist crimes in 2015, including the political prisoners executed in Iran, Camp Liberty martyrs, and victims of terrorist attacks in January and November in France.

Let us pay tribute to them by observing one minute of silence.

I am very pleased to see you, ladies and gentlemen, the mayors and elected representatives of France, here at the headquarters of the Iranian Resistance.  Mayors and elected officials of France are representatives of the most significant institutions of democracy in this country. They have always stood beside the Iranian Resistance and this has been really admirable.

You have protested against violations of human rights and suppression of women in Iran. You have supported Ashraf and Camp Liberty when they were attacked by the Iranian regime’s operatives in Iraq. You were at the forefront of the campaign of justice for the Iranian Resistance both in the case of June 17th attack which was terminated last year and the cases of terrorist designations which were reversed in all countries.

The declarations signed by 14,000 mayors and elected representatives of France in support of the Iranian Resistance, are very precious documents. They express the great values of France.

At this point, let us remember the friends who are not among us any more: Adrian Zeller, Mourice Bouscavert and also Abbe Pierre who we commemorate his first anniversary today. They played a valuable role in our struggle.

Also your political stances over the years have been admirable. Time and again, you warned against a number of threats: the mullahs’ nuclear weapons; Islamic fundamentalism; violations of human rights in Iran and the mullahs’ domination of the region.

The tragedies in January and November but underlined the importance of the French mayors’ repeated warnings against the threat of Islamic extremism. On the other hand, the cancerous expansion of Daesh showed how destructive the consequences of the mullahs’ hegemonic ambitions in the region have been. When Iran’s ruling mullahs helped their puppet governments in Iraq and Syria to suppress the people of these countries, the opportunity emerged for Daesh to grow and spread.

Last year, in the wake of the November 13th massacre in France the eyes of the world opened to a major challenge: the challenge of mass killings of innocent people in the name of God. Is this Islam? Or it is reversing the message of Islam in the interests of tyrannical governments?

Should Muslims be confronted? Or to the contrary, tolerant and democratic Muslims should be reinforced? In fact, all religions have come to free mankind, not to promote tyranny, terror and misogyny.

The Quran says there is no compulsion in religion. For this reason, we decisively reject the mullahs’ Sharia laws that are contrary to Islam. We reject despotic regimes whether they are called Velayat-e Faqih, Islamic Caliphate or Islamic State.

Is it true that watching football and listening to music are considered enmity to God, but killing 300,000 Syrians is not? The genuine Islam advocates freedom. It promotes women’s equality. It calls for popular sovereignty. Yes, Islam calls for tolerance.

Fortunately, France is taking steps in this direction.

Actually today, the true values of France are in danger. This is a battle of values. It is our common battle and we stand by you with a 37-year experience of struggle against religious fascism and we can join together to advance this battle.

In a few days, Hassan Rouhani, president of the religious fascism in Iran will come to Paris. Two and a half years ago, when he took office, he claimed to promote moderation. Now, he is coming to Europe with an ominous record. That includes 2000 executions, suppression of religious minorities, consecutive executions of political prisoners, rocket attacks on Camp Liberty, rampant poverty, unemployment, and economic stagnation in Iran, stepped up deadly interventions in Syria and Iraq, warmongering in Yemen, terrorism in Kuwait and Bahrain, testing new missiles.

To justify supporting the mullahs, some claim that Rouhani does not approve of these policies but Rouhani does. He defends the executions. He supports Bashar Assad’s dictatorship. He tries to expand the Revolutionary Guards’ missile program and he advocates religious tyranny.

Our 30-year experience has proven that no moderate can emerge from a religious fascist regime. Cooperation with impostors such as Khatami and Rouhani and supporting them will practically add fuel to the fire of suppression in Iran and war in Syria and Yemen.

Last week, the implementation of the P5+1 nuclear agreement with Iran began. It was a very important experience because it proved that the Iranian regime is sensitive to pressure.

The Iranian regime had never intended to retreat from its nuclear program. However, the Iranian Resistance’s revelations of its secret sites, the Iranian people’s opposition to this costly program and the international sanctions brought enough pressure on the regime to force it to the negotiating table.

Now is the time to put pressure on the regime on violations of human rights in Iran. They must be compelled to stop executions, free political prisoners, and stop attacks on Camp Liberty and massacre of the people of Syria. They must be stripped of their missile systems. They must be forced to stop interfering in Iraq, Lebanon, Yemen and other places. This is the road to peace and stability in the region.

The mullahs’ apologists and lobbies have repeatedly claimed that in the wake of the nuclear agreement, the Iranian regime would move towards moderation but you can see that they have moved in the other direction. They said that the mullahs would improve Iran’s economy but the Iranian economy has ground to a halt because they spend whatever they gain on the wars in Syria, Yemen and Iraq.

Next March, another test would be awaiting the Iranian regime when they are going to hold their sham elections for the parliament and the Assembly of Experts.

Of course this so-called elections are taking place without any genuine opposition.  It is in fact a ceremony to distribute shares of power among the regime’s factions. If Khamenei is forced to give any share to his rival faction in the parliament and the Assembly of Experts, his own status would be undermined. If he does not give them any share, he would face a terrible crisis. Rouhani is travelling to Europe to cover up the regime’s weakness and isolation. He is trying to put up a moderate face to cover up the executions in Iran and the mullahs’ role in the massacre of Syrians.

The people of Iran expect that France not to buy the deceptions of Rouhani and stand by the people of Iran. This is the same as defending humanity, and defending the values of France, and it is the right policy.

The Iranian regime is the main cause of instability, war and terrorism in the region, and the tide of refugees. The Iranian people and Resistance, however, hold the key to confronting the regime.

The people of Iran demand that the international community and France in particular stand by the Iranian people’s Resistance in their struggle against the epicenter of extremism, namely the Iranian regime, to achieve freedom and human rights.

I thank you all very much.