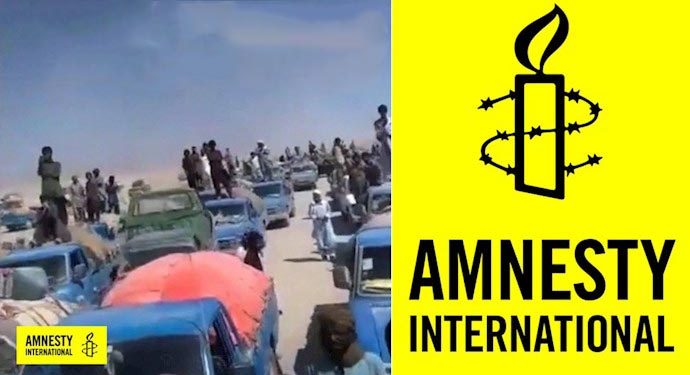 On 4 March the National Council of Resistance of Iran (NCRI), and the People’s Mujahedin of Iran (PMOI / MEK Iran), reported that the protests in Iran’s Sistan and Baluchestan province, which started on February 22, continued despite the regime’s heavy security measures. Protesters in Zehkolut blocked the route to Rudbar, blocking security forces from commuting to other locations to suppress protests.

The regime has been requesting reinforcements from nearby provinces and has been using these routes to transport them to protest sites.

After the Revolutionary Guards (IRGC) opened fire and killed fuel porters in the Saravan region, riots began near the Iran-Pakistan border. Videos and images shared on social media showed a large number of IRGC troops, as well as heavy artillery brutally oppressing the protesters.

Since the incident, protests have spread through the province of Sistan and Baluchestan. To prevent news of the protests from circulating, the regime has blocked off internet access. According to local reports, security forces have shot and killed dozens of protesters while also arresting a large number of others.

People set fires and blocked roads used by security forces in Nik Shahr. The road from Iranshahr to Sarbaz was blocked in the town of Sarbaz. Protesters had also blocked the road from Gandavak to Jakigur.

Locals in Mehrestan have reported that security forces are shooting bird shots at random to intimidate people and discourage rallies.

Transporting small quantities of fuel over the border and selling it to clients has been the only way for many poor people in Sistan and Baluchestan to make a living and support their families.

More than four decades of regime corruption and racism against the Baluch minority are the reason they live this way. In the pretext of preventing smuggling, the regime’s armed forces routinely attack and kill them. Besides that, the regime’s security forces operate a massive fuel smuggling network that dwarfs the operations of Sistan and Baluchestan’s fuel porters.

There has been an immense amount of solidarity for the Baluch people and condemnation of the regime’s atrocities since the demonstrations started.

Amnesty International called for an independent investigation into the killings of Baluchestan’s fuel porters in a report published on Tuesday.

Diana Eltahawy, Deputy Director for the Middle East and North Africa declared at Amnesty International, “by opening fire on a group of unarmed people, Iranian security forces have displayed a callous disregard for human life. There must be urgent, independent criminal investigations into these unlawful killings, in line with international law and standards. Anyone against whom there is sufficient admissible evidence must be prosecuted in a fair trial, without resorting to the death penalty.”

Amnesty International has called for the international community to intervene in the Iranian regime’s human rights abuses against Baluch fuel porters.

A large group gathered in Karachi, Pakistan, near the Iran-Pakistan border, to express support for Baluch protesters and condemn the Iranian regime’s killing of fuel porters and demonstrators.