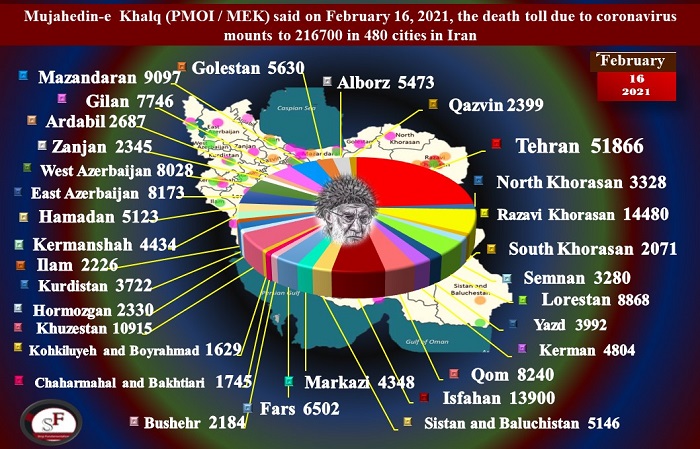 By February 16, 2021, at least 216,700 people have lost their lives due to Covid-19 in 480 cities across Iran’s 31 provinces, according to reports from the Iranian opposition People’s The National Council of Resistance of Iran (NCRI), and the People’s Mujahedin of Iran (PMOI / MEK Iran). However, the official death toll as declared by the regime is just 59,117.

The Covid-19 death toll in the provinces is as follows:

More than 216,700 people have died of the novel #coronavirus in 480 cities checkered across all of #Iran's 31 provinces, according to the Iranian opposition PMOI/MEK. pic.twitter.com/uDPF1kSZJR

“We have a tough four weeks starting from January 19. From this day forward all new cases across the country must be considered cases of the mutated UK strain,” said Health Minister Saied Namaki on Monday. “If the illness remains active for a long time, we will be facing many difficult challenges. If it took two weeks to go from A to B with the previous virus, this virus will only take 72 hours,” he added, according to the regime’s official IRNA news agency.

The regime’s Health Ministry spokesperson declared that the mullahs’ Covid-19 numbers on Monday showed 7760 new cases in just 24 hours, which is the highest in the past 65 days and there is now the threat looming of a fourth Covid-19 peak.

Alireza Raisi, spokesperson for the regime’s National Covid-19 Task Force said: “if an individual contract the UK strain of coronavirus, they must be immediately quarantined and under special measures.”

During the last 10 days, the number of people hospitalized for Covid-19 in Tehran’s provinces had reached almost 2,000. There are now more and more people seeking medical care on a daily basis in hospitals.

About 350 ICU beds in hospitals across Khuzestan province are set aside for Covid-19 patients. However, many cities are facing a shortage of ICU beds. In Khuzestan, there are now 500 confirmed COVID-19 patients in the hospital and at least 400 cases with symptoms that are like Covid-19.”

The number seeking medical care has increased by 8-fold compared to 4 weeks ago. This will most definitely lead to a rise in the number of new cases,” said the deputy dean of Dezful Medical Sciences University.