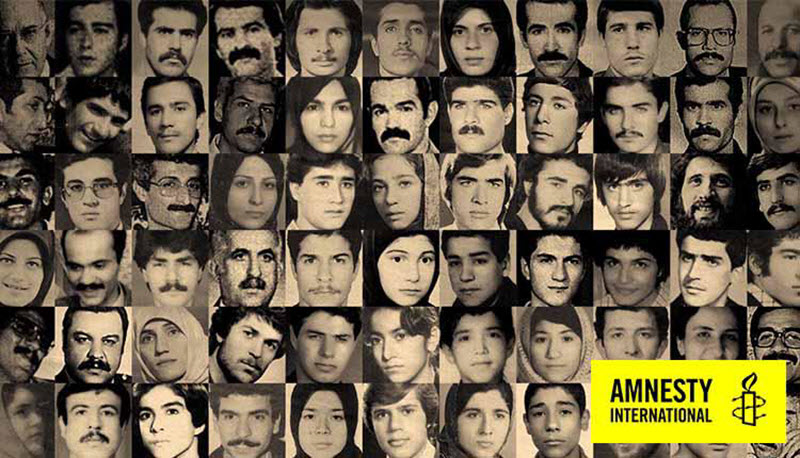 Year of Shame and Iran: Blood Soaked Secrets are the titles of Amnesty International’s latest reports.

Indeed, 2018 was a year of upheaval and shame in Iran, beginning with the uprising that started in Mashhad and quickly spread across the country, and ending with the continued protests and demonstrations that have reached across the social strata of Iranian citizens.

Human rights defenders have studied the regime since its inception. With each year, the regime seems to grow worse than the last. In fact, the clerical regime has been condemned 65 times for human rights abuses by the UN General Assembly.

Last year, according to Amnesty, some 7000 people were arrested. The December 2017 — January 2018 uprising was unprecedented in the history of Iran’s religious dictatorship. President Rouhani blames the uprising for the US exit from the 2015 nuclear deal.

Philip Luther, Amnesty International’s Middle East and North Africa Research and Advocacy Director explains, “Throughout the year [2018] Iran’s authorities sought to stifle any sign of dissent by stepping up their crackdown on the rights to freedom of expression, association and peaceful assembly, and carrying out mass arrests of protesters.”

He was allegedly tortured for a month before being released on bail, but was arrested again days later based on a forced confession obtained while he was in custody. Bakhshi’s current whereabouts is unknown.

In the Year of Shame report, Luther suggests, “Governments which are engaged in dialogue with Iran must not stay silent while the net of repression rapidly widens. They must speak out in the strongest terms against the crackdown and forcefully call on the Iranian authorities to immediately and unconditionally release all those jailed for peacefully expressing their right to freedom of expression, association and assembly, including through their human rights activism.”

Amnesty International’s 200-page report Blood Soaked Secrets was published on the 30th anniversary of 1988 massacre of 30,000 political prisoners in Iran. Most of the victims were members and supporters of Iranian opposition — the MEK. It recounts the story of the 1988 massacre. Amnesty’s reports say that these are crimes against humanity and the perpetrators should be held accountable by the international criminal court. “The UN establishes an independent, impartial and effective international mechanism to help bring those responsible for these abhorrent crimes to justice,” the report concludes.

Ayatollah Hossein-Ali Montazeri, the handpicked successor of Khomeini, publicly objected to the mass executions. In 2016, his son published an audiotape of his conversation with members of the Death Commission. Montazeri can be heard telling them that they are responsible for a crime against humanity. He said, “The greatest crime committed during the reign of the Islamic Republic, for which history will condemn us, has been committed by you. Your names will in the future be etched in the annals of history as criminals.” Montazeri was placed under house arrest for the rest of his life, and died in 2009.

The Iranian regime is founded on the idea of Velayat-e faqih (Guardianship of the Islamic Jurist), and for this doctrine to thrive, it must expand beyond its borders. Ruhollah Khomeini, the first Supreme Leader, has been quoted as saying, “If Islam is trapped within Iran’s borders it will die.” This is the reason for Iran’s participation in proxy wars and terrorist activities.

Regime officials and leadership of the IRGC must be held accountable and should stand trial before an international tribunal for their crimes against humanity.