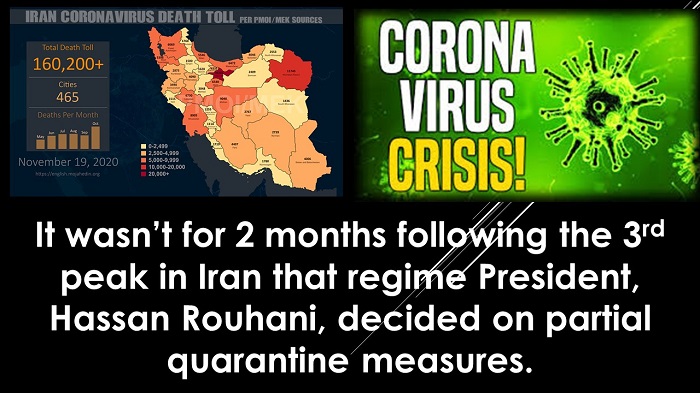 The death toll from COVID-19 has reached at least 160,200 in 465 cities recorded in all of Iran’s 31 provinces. These figures are accurate reports received by the Iranian opposition the National Council of Resistance of Iran (NCRI), and the People’s Mojahedin Organization of Iran (PMOI / MEK Iran), while the regime is revealing only 43,417 have lost their lives.

The breakdown for provinces are:

More than 160,200 people have died of the novel #coronavirus in 465 cities checkered across all of Iran's 31 provinces, according to the Iranian opposition PMOI/MEK.

It wasn’t for 2 months following the 3rd peak in Iran that regime President, Hassan Rouhani, decided on partial quarantine measures. There have been several lies told by Rouhani, such as blaming the virus fatalities on families’ movements and that there were no issues regarding the availability of medical facilities and there were plenty of hospital beds, ICUs, and ventilators. He never mentioned that medical professionals have been working 24/7 at night for 9 months

Rouhani has released what he considers to be sufficient money to give a 1/3rd of the people strength. This is a paltry 1 million rials monthly, (less than $4). On Wednesday’s Majlis (parliament) session, Mohammad Reza Sabaghian, MP from Bafgh, Yazd province announced that it’s not the Majlis, but the Supreme Security Council, that is making any decisions while the Covid-19 Task Force makes decisions for the whole country and the Majlis. The Majlis does not have any representative in the Covid-19 Task Force. Basically, the Majilis is dead.

The ISNA news agency repeated remarks made by the head of the infectious diseases department of Tehran’s Masih Daneshvari hospital who said that since the 3rd peak of COVID-19 set in more and more people are contracting the virus. ‘’We’re all witnessing the noose of Covid-19 closing in tighter than ever and quickly spreading across the society.”

An Isfahan Medical Sciences University spokesperson confirmed on Tuesday that, apart from Kashan Aran and Bidgol counties, 2,044 people have been hospitalized in the province. This was transmitted by the Javan Daily, a newspaper linked to the Revolutionary Guards (IRGC). Also, 397 patients are in ICU and a further 37 people have lost their lives to coronavirus in the province in just 24 hours.

Over 160,200 people have died of the novel #coronavirus in 465 cities checkered across all of #Iran’s 31 provinces, according to reports tallied by the Iranian opposition PMOI/MEK as of Thursday afternoon local time, November 19.https://t.co/xPUHCqoqvT

The dean of West Azarbaijan Medical Sciences University said on Wednesday, “In the past 24 hours, we have unfortunately identified 267 new coronavirus cases in the province. Twenty-seven patients have lost their lives during the same period… There are 307 patients in ICU, 88 of which are on ventilator support.” (Source: Javan Daily, November 18)

Yazd Medical Sciences University has also confirmed 19 Covid-19 deaths on Wednesday, while 1,086 are in hospital with 214 in ICU.

Mrs. Maryam Rajavi the President-elect of the National Council of Resistance of Iran (NCRI): The mullahs ruling Iran facilitated the spread of coronavirus and did not make any serious efforts to contain it. This is why the pandemic has turned into a source for hidden escalation of fury and anger.