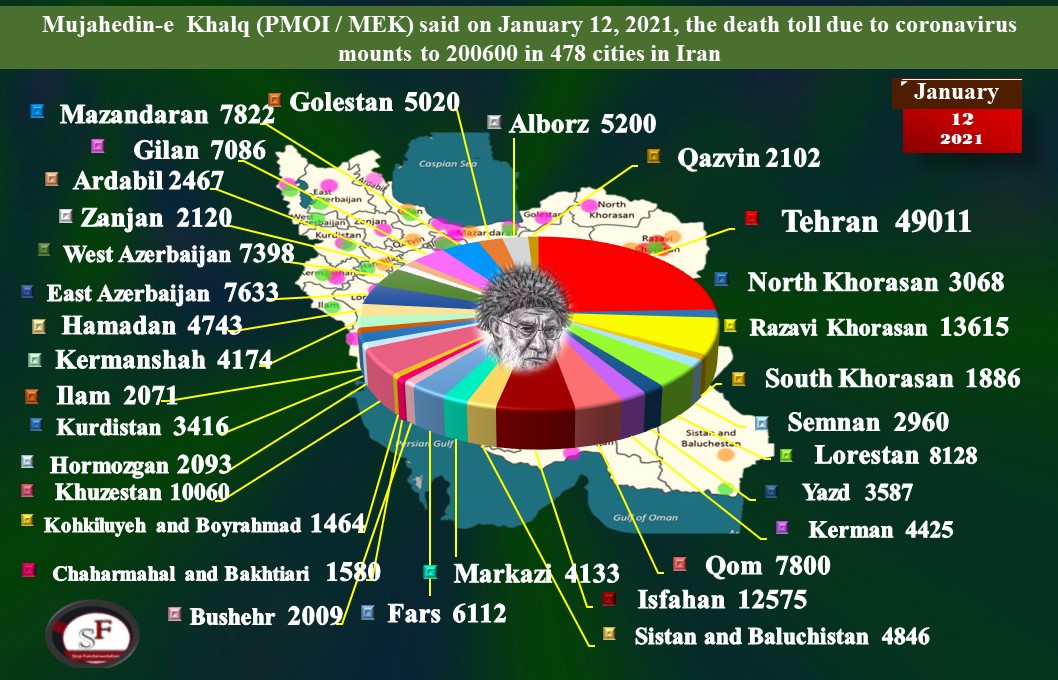 The National Council of Resistance of Iran (NCRI), and the People’s Mojahedin Organization of Iran (PMOI / MEK Iran) have exceeded the recorded 200,600 fatalities from COVID-19. Many of these deaths were avoidable had the Iranian regime-controlled the spread of the virus, but now it has turned into a humanitarian disaster. To make matters worse, the regime’s Supreme Leader, Ali Khamenei, has publicly banned U.S. and UK vaccines from being marketed in the country.

Khamenei’s Decision on the US and UK Vaccines Will Mean More Iranian Lives Lost: #NCRI and #MEK reported that Ali Khamanei has prohibited the purchase and use of foreign-sourced vaccines now being used to protect people in many other parts of the world. #WeStand4FreeIran pic.twitter.com/S08G0rLUi7

It has also said that it was international sanctions that were really the cause of not being able to purchase COVID-19 vaccines.

So bad has the regime’s response been to this devastating event that earlier in the pandemic it was quite clear that little was going to be done to rein it in.

As there is no sign that the regime is going to allocate any cash to buy vaccines, the regime’s leaders have used every excuse possible to help the people combat the virus.

Regarding the #Coronavirus, the import of U.S. and British #CovidVaccine into Iran is forbidden. I've said this to officials and now, I say it publicly. If the Americans could produce vaccines, this Corona fiasco didn't happen—Supreme Leader Ali Khameneipic.twitter.com/V6dcafU7iu

On December 7th, Abdolnaser Hemmati, head of Iran’s Central Bank, stated that U.S. sanctions don’t allow for the transfer of funds to take place to buy the vaccine through COVAX, the organization endorsed by the World Health Organization which is responsible for distributing the vaccine.

COVAX has said this is certainly not the case and there are no legal obstacles preventing Iran from buying vaccines, particularly as the U.S. Treasury’s Office on Foreign Assets Control (OFAC) has issued a license covering the purchasing of COVID-19 vaccines.

Nasser Riahi, the head of the Iranian Drug Importers’ Union, said on December 9th that there is no problem in transferring currency to enable the importing of the vaccine and any other pharmaceutical items into Iran.

The state-run Aftab-e Yazd daily reported on December 14th, saying that officials have stated that there is no possibility of importing foreign-made vaccines. However, this cannot be the truth as witnesses can prove that officials and their families have been importing vaccines for their own use already.

When the regime announced its decision not to import the better vaccines from the U.S. or the United Kingdom this resulted in international condemnation. Mansoureh Mills, a researcher for Amnesty International, said the regime banning proven vaccines showed a lack of respect for human rights which is what Iran had become famous for.

Khamenei and his regime, it has been alleged, profits financially from producing their own vaccines.  The state-run Jahan-e Sanat on December 14th reported that: “the Food and Drug Administration is under heavy pressure to approve domestically produced vaccines and anti-coronavirus medicines. Because obtaining approval from the Ministry of Health means a huge profit for the drug owner.”

The rising death toll from COVID-19 can be put down to the regime’s mismanagement, which has led to an increasing dislike of the regime. If the regime really intended to control the virus, it would have provided financial support to the people like other countries have willingly done so that people could keep themselves and their families safer through being in quarantine. Despite the constant bullying by the regime, Iran’s unsettled youth are eager to end the regime’s inhumane power over the people.

For such a long time the West and the EU have turned a blind eye to the activities of the regime and its violation of human rights but now using the pandemic to kill off the people needs to be questioned and it is important for representatives of the international community to put their feet down and explore the numerous incidences of human right abuses.

The delay in purchasing and importing the #COVID19 vaccine is the continuation of the mullahs regime's criminal policy, which will continue to claim more victims among the deprived and oppressed people. #Iran pic.twitter.com/40ZIIhO8dP

Mrs. Maryam Rajavi the President-elect of the National Council of Resistance of Iran (NCRI), said: the death toll in Iran, even the state-controlled official figures, is much higher than in the neighboring and Middle Eastern countries. Countries whose economic and social infrastructure and foundations are often much weaker than Iran. The death toll per capita in Iran is the highest in the world.