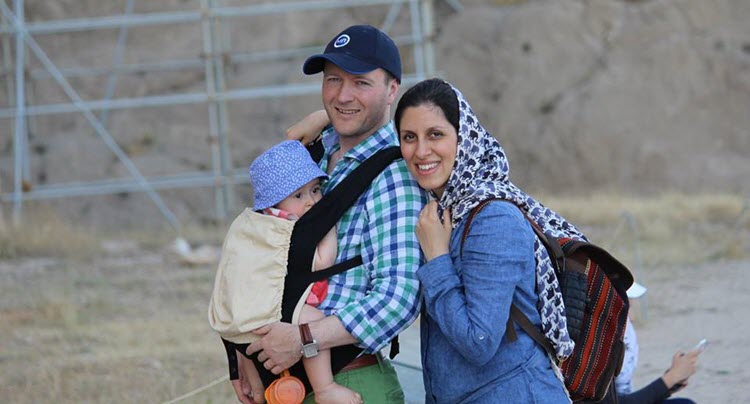 Once she was just another UK wife and mother, living in West Hampstead, on the banks of the River Thames.

Life has become very different for Nazanin Zaghari-Ratcliffe, who has finally been taken from her cell at Iran’s notorious Evin prison, to Iranmehr Hospital in Tehran.

There she was seen by a specialist neurologist for her back and neck, because without urgent treatment she runs the risk of permanent impairment.The doctor was concerned about Nazanin’s neck and shoulder, as well as the nerves in her right arm and hand. He said she should be admitted to hospital immediately, or she may be left with a permanent injury.

Now, she is back in prison.

Richard Ratcliffe spoke to his 38-year-old wife on Saturday.  It was the first times they’ve spoken in a month He said that, “She cried for the entire call. Nazanin’s fragile health this weekend has been a reminder that we must continue to campaign, that we cannot allow many more months of this to pass.”

“I am grateful that Nazanin has now been seen by a specialist, and that her health concerns can be addressed as soon as possible. I hope that his concerns are acted upon by the Iranian authorities – and that she does indeed not suffer any permanent physical damage from this ordeal. The psychological is already more than enough,” he added.

Nazanin suffers from worsening insomnia. She describes being unable to sleep due to sudden panics and a feeling of inescapable pressure. The doctor was told of her sleeping conditions, which were on a stone floor with only a blanket. She also discussed her poor diet and months with no exercise, along with extreme psychological pressures.

Many years ago in Iran, Nazanin had an operation on her neck. Additionally, Nazanin needed extensive physiotherapy on her neck and shoulder a few months after Gabriella was born, when she was living in the UK.

Nazanin’s story has been previously reported. She has dual Iranian and British citizenship, like so many detainees.  She came to Iran with her two year old daughter to visit family. At the Tehran airport, on April 3 she was arrested while awaiting her flight home.

She was denied access to her young daughter, Gabriella, whose passport was confiscated, forcing her to stay in Iran  with her grandparents.

Nazanin, who previously worked as a media charity worker with Thomson Reuters, had her appeal rejected last month.

In addition to all of this, she’s enduring the trauma of interrogations and threats to her family.

According to Richard, these conditions have exacerbated his wife’s previous condition before she was jailed.

“It is clear that the move to the general cells is much better – I am thankful for the support offered to her by her fellow cell mates, for the additional visits Gabriella now has to see her mum, and for the increased medical attention Nazanin receives,” Richard said.  “However, it also means we have a greater awareness of just what Nazanin is going through, and of the price she is continuing to pay the longer this is unresolved.”

Her family are keeping the British Embassy in Iran updated with Nazanin’s medical situation.