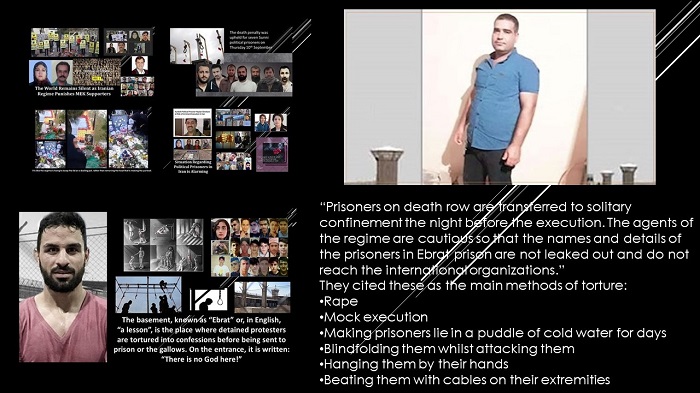 According to The People’s Mojahedin Organization of Iran, (PMOI / MEK) reporter, on September 30th prison guards of the Greater Tehran Penitentiary exerted extreme force in order to relocate political prisoners that had been arrested at the November 2019 uprising in Hall Two of the facility’s Unit Five section. At this particular protest, the regime killed an estimated 1,500 protesters, injured at least 8,000, while 12,000 were arrested.

Azvaji, who is in charge of the prison’s Unit Five, made his way to Hall Two of Unit Five on Wednesday and told the political prisoners that they were to be transferred to Unit Two where they would be divided up based on the crimes they had allegedly committed.

The political prisoners were angered by this move as they already had some of their own items brought to them which were not related to prison supplies, but they had had to leave behind. Unit Two’s facilities were nowhere near as good and there was no guarantee they would not come into contact with COVID-19.

The prisoners also commented by saying:

“If the principle to separate prisoners based on their crimes is to be enforced, then why did you bring at least eight major drug dealers to the prison to make drug addicts out of the prisoners?” the prisoners asked.

Azvaji took no notice of the complaints and threatened force on the political prisoners if they would not do as they were told. Not long after that, Mohammad Habibi, an imprisoned teacher, was told by prison officials to tell the other inmates to get ready to transfer. There were not given much notice and the prison guards forcibly removed them. This could mean that these prisoners could be infected by exposure to COVID-19 for the first time.

The biggest worry now is that this has likely to have come about because of the increase in victimization by the regime in the country. One particular case is that of Navid Afkari who was eliminated just because he used his democratic right to protest and to try to prove his guilt he was tortured so that he would confess to a crime he did not do. The regime was so determined to use Afkari as an example and not allow anything or anyone to stop the execution that they did not even inform his family or lawyer and even when they were told there were restrictions imposed at his burial so that protesters could not interfere.

Now that Afkari has been executed, the regime may very well execute more prisoners, including MEK supporters involved in the 2019 protests. The regime is refusing to withdraw any death penalties that have been imposed by the judiciary on other prisoners. One family member of a convicted protester has already committed suicide because he had been intimidated by regime officials.

International human rights bodies and activists have warned against the mounting pressure on political prisoners in Iran. The regime, which is in constant fear of the reemergence of nationwide protests, is trying to cause intimidation and fear among the population through the persecution of arrested protesters.

Mrs. Maryam Rajavi the President-elect of the National Council of Resistance of Iran’s (NCRI) said: I urge the international community, especially the United Nations Secretary-General and other HumanRights organizations to intervene immediately to stop the executions, secure the release of the prisoners, and prevent a major humanitarian catastrophe in Iran’s prisons.

I urge the international community, especially the United Nations Secretary-General and other #HumanRights organizations to intervene immediately to stop the executions, secure the release of the prisoners, and prevent a major humanitarian catastrophe in #Iran’s prisons pic.twitter.com/LFt91vSPGI