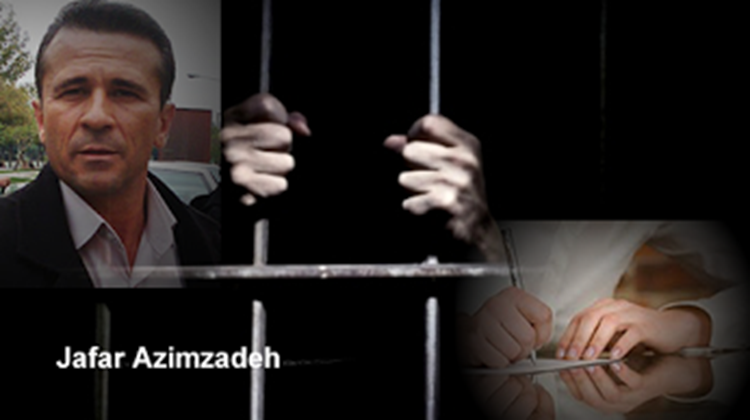 Political prisoner Jafar Azimzadeh’s health is deteriorating. The workers’ rights activist has been on an indefinite hunger strike in Tehran’s notorious Evin Prison for nearly three weeks now and the regime is putting pressure on him to end it.

On Tuesday 17th May, the Tehran prosecutor’s office “demanded that he end his hunger strike” according to a report by the National Council of Resistance of Iran (NCRI). He had to be transported by car to the visitor’s hall to see his wife on Tuesday due to being too frail.

Reports indicate that “officials from the Tehran prosecutor’s office have suggested to Azimzadeh that he would be given an opportunity to take long-term leave from prison if he breaks his fast”.

However Azimzadeh allegedly replied to the representative of the Tehran prosecutor’s office saying that he did not go on hunger strike with the aim of getting prison leave. He said his demands were clearly outlined before the hunger strike commenced, with the first thing being “to halt the implementation of the [current] verdicts and re-evaluate our file rejecting the accusation of acting against national security”.

He was arrested last November, charged with engaging in peaceful and legitimate trade union activities and was sentenced to six years in prison.

The NCRI report that the mullahs’ kangaroo court in Saveh, south-west of Tehran, is considering Azimzadeh’s case.

Azimzadeh has also demanded that he be allowed to properly defend himself in the court.

Following the release on bail of his fellow political prisoner Ismail Abdi, Azimzadeh sent a statement from prison. In it he expressed his happiness that his friend was released, but said that this “does not mean that even a small step was being taken to realize our demands and the demands of millions of teachers and workers”.

He said that they demanded “an end to treating social and civil protests as security issues and removing the charge of ‘associating and colluding with intent to act against national security’ from the open files of protesting workers and teachers and imprisoned union activists, including ourselves”.

In the statement Azimzadeh highlighted that the hunger strike commenced in protest against the “flagrant violation of the essential rights of Iranian workers and teachers” in Iran.

He said: “Accordingly, as far as it concerns Ismail Abdi’s release through a heavy bail and an open case with heavy security charges, such an act from the legal authority dealing with his case even within the framework of existing law-breaking actions, was routine and, in Ismail’s case, predictable.” Therefore, he said, the hunger strike would continue.

The full text of Azimzadeh’s statement can be read on the NCRI’s website.