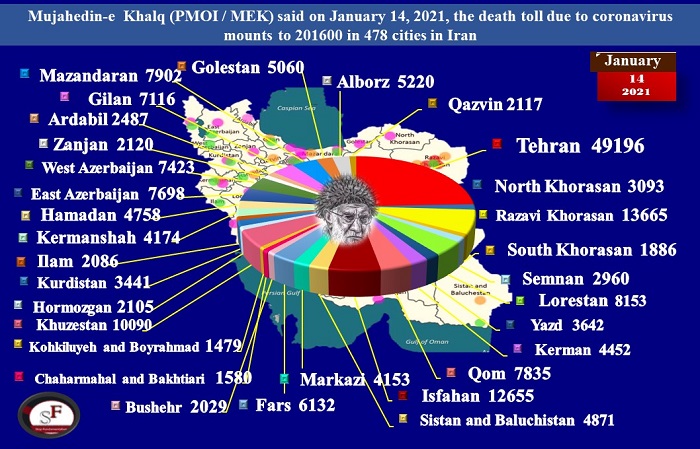 Coronavirus deaths in Iran have now exceeded over 201,600, according to reports tallied by The National Council of Resistance of Iran (NCRI), and the People’s Mojahedin Organization of Iran (PMOI / MEK Iran), who advises that the regime’s “inhumane” policies are destroying people’s lives.

The health crisis is still a worrying situation, so the number of hospitalizations due to the air pollution that is worsening the effects of #COVID19 makes the situation urgent. Over 201,600 people have died of #coronavirus in #Iran according to #MEK.https://t.co/m5LnyRPkN8 pic.twitter.com/EBaZuFuuij

In fact, Khamenei has actually said that he “ordered” authorities not to import the vaccine, even though he publicly blamed international sanctions, despite the US Treasury’s Office on Foreign Assets Control (OFAC) and the vaccine distribution agent COVAX saying that sanctions did not stop the vaccine import.

Nasser Riahi, the head of the Iranian Drug Importers’ Union, admitted in December that there was no issue with buying the vaccine or any other medicine. Even President Hassan Rouhani admitted on Saturday that the regime could have imported vaccines sooner, as they were offered them by the manufacturers, but refused.

The MEK said that this proves that the regime wanted to use the coronavirus to oppress the Iranian people, something that Khamenei made clear in March 2020, when he described it as a “test”, “opportunity”, and “divine blessing”. They say that the regime is making up all sorts of excuses but that the truth is that they are just trying to buy more time and allowing more to die.

The refusal to import vaccines was condemned around the world, with Amnesty International researcher Mansoureh Mills, saying that it was “in step with the authorities’ decades-long contempt for human rights, including the right to life and health”.

Now is the time to demand that #COVID-19 vaccines are available to everyone. pic.twitter.com/iRJuL7QSCD

While the state-run Aftab-e Yazd newspaper wrote: “Officials have said that it is not possible to import foreign vaccines, but we are witnessing that vaccines have been imported from reliable countries and are being used by officials, along with their children and associates.”

The regime claims to be developing a domestic vaccine, which 167 Iranian pharmacists labeled a “joke”, but it is under the control of Khamenei’s financial institution and even the state-run media are saying that this will make him a huge profit.

The regime not only lied about the virus at the start and have continued to cover it up, but also used it to suppress popular protests, caring more about hanging onto power than the lives of Iranians. This has increased people’s hatred of the regime and should spark international condemnation.

The delay in purchasing and importing the #COVID19 vaccine is the continuation of the mullahs regime's criminal policy, which will continue to claim more victims among the deprived and oppressed people. #Iran pic.twitter.com/40ZIIhO8dP

Mrs. Maryam Rajavi is the President-elect of the National Council of Resistance of Iran’s (NCRI): The dreadful Coronavirus death toll of over 201,600 is the outcome of the regime’s criminal policies which among other things have resulted in plundering people’s wealth.