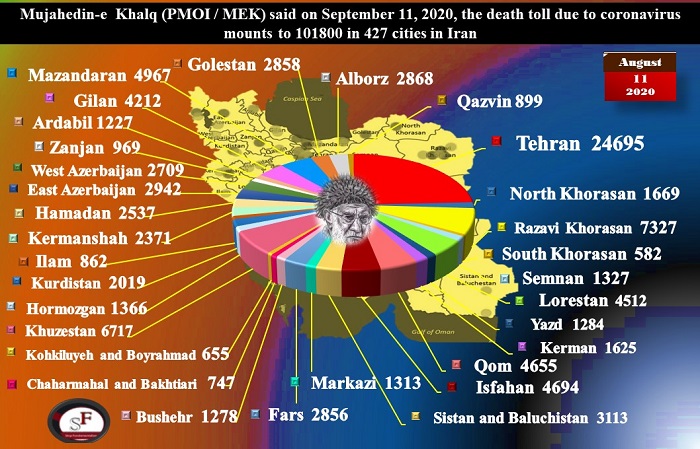 More than 101,800 people in 427 cities from all 31 provinces in Iran have died from Covid-19, according to a Friday announcement from The People’s Mojahedin Organization of Iran (PMOI / MEK Iran). The regime has confirmed 22,913 of these deaths or approximately one-fifth of the true number of fatalities.

On Friday, the caretaker at Alborz Medical Sciences University reported the latest official coronavirus data from Alborz Province. “During the past 24 hours, 535 people with suspicious symptoms have sought medical care in provincial medical centers and eight Covid-19 patients have lost their lives. The total number of fatalities from this illness in this province has reached 1,003,” he said, according to the Ministry of Intelligence and Security (MOIS)-affiliated Mehr news agency.

The Dean of the Medical Sciences University in Tabriz reported official data from his province. “On Thursday, we had 280 confirmed Covid-19 positive cases. Around 40 to 50 percent of all the tests have been positive,” he said, adding that another 145 people were hospitalized the same day. “105 people are under ventilators. Unfortunately, seven people lost their lives to Covid-19 on Wednesday and another 12 died on Thursday across this province,” he added, according to the semi-official ISNA.

Over 101,800 people have died of the novel #coronavirus in 427 cities checkered across all of #Iran’s 31 provinces, according to reports tallied by the Iranian opposition PMOI/MEK as of Friday afternoon local time, September 11.https://t.co/bR3DR9W5jT

There have been 24,695 deaths in Tehran alone. The general manager of education in Tehran expressed concern about reopening schools while infections rage across the province. “Presently, we see all regions as red and we no longer have yellow or white areas,” he said, according to the Jahan-e Sanat daily. The MEK has previously reported on the regime’s controversial decision to reopen schools.

The Deputy Dean of the Medical Sciences University in Lorestan Province told the Islamic Revolutionary Guards Corps (IRGC)-affiliated Javan daily on Friday that the number of hospitalizations in the province has increased. “Currently we have five cities that are in ‘red’ conditions regarding this virus. The number of people seeking medical care in hospitals has increased by 30 percent and those hospitalized have increased by 35 percent. The number of deaths has also increased,” he said.

Over 101,800 people have died of the novel #coronavirus in 427 cities checkered across all of #Iran’s 31 provinces, according to reports tallied by the Iranian opposition #PMOI/#MEK.https://t.co/Kh3OgNYL3k pic.twitter.com/je8xaX0up1

On Friday, the Mehr news agency broadcast the spokesman of the Isfahan Medical Sciences University’s official coronavirus statistics. “Since yesterday 162 new patients with COVID-like symptoms have been hospitalized in various Isfahan medical centers,” he reported. “The number of coronavirus patients under ICU in Isfahan stands at 179. Since yesterday 11 people with COVID-like symptoms lost their lives.”