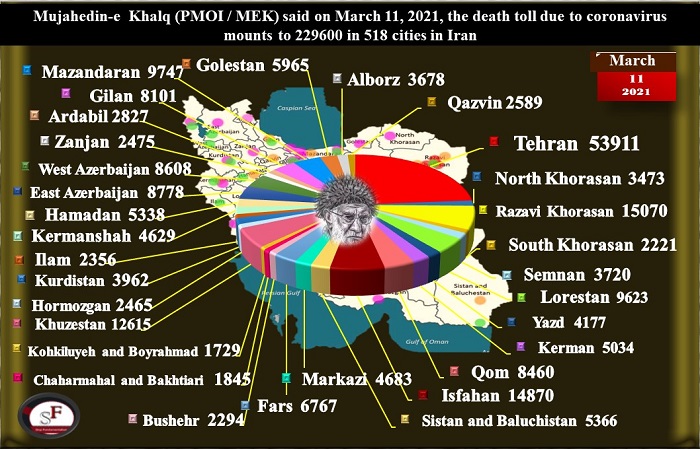 According to reports tallied by the Iranian resistance The National Council of Resistance of Iran (NCRI), and the People’s Mujahedin of Iran (PMOI / MEK Iran), as of Thursday afternoon, local time, 11 March, over 229,600 people have died as a result of the Covid-19 in 518 cities spread across Iran. The regime’s official death toll is 61,016, which is about a third of the actual figure.

“Considering the fact that the number of positive Covid-19 cases have doubled in comparison to last week, a massive wave of this virus is taking shape at a very fast rate. The mutated strain of coronavirus is circulating, and this has significantly raised our concerns,” said the head of the Bandar Abbas Health Network on Wednesday, according to the Mehr news agency.

According to the Mehr news agency, which is associated with the regime’s Ministry of Intelligence and Security (MOIS), a representative for the regime’s Health Ministry said on Wednesday; “The UK strain has been identified in many provinces. Many individuals that have contracted this type of the virus have never traveled, which indicates the virus is circulating.”

Despite the fact that regime officials and experts are reporting a shortage of beds and other hospital necessities, as well as an increase in the number of new cases, regime President Hassan Rouhani continued his daily pattern of lies. On Wednesday, Rouhani claimed, “We are exporting ventilators, we have the ability to produce a variety of medical needs, and we are reaching the point of mass-producing the Iranian vaccine for Covid-19.”

The Director of Iran’s House of Nurses also added in an interview with the state-run Hamshahri daily “Iran had the highest death rate among nurses during the coronavirus pandemic. The Health Ministry reported 100 nurses died of Covid-19, while the Nursing Apparatus reports 110, and the House of Nurses emphasizes that this figure is over 120 or 130.” “Wrong policies are the reason why our nurses have died. In other countries, however, these number of nurses have not died of Covid-19.”

As per the Mehr news agency, the deputy dean of Shiraz Medical Sciences University said on Wednesday, “With 120 new cases in the past 24 hours across Fars province the total number of people hospitalized currently stands at 605, of which 86 are in ICUs.”

According to the Fars news agency, which is linked to the regime’s Revolutionary Guards (IRGC), the dean of Qom Medical Sciences University said on Wednesday, “The coronavirus situation in the province should be described as a slow to fast trend. Usually following an increase in the number of new cases, the number of people hospitalized, and the death rate will also increase. Therefore, there is still a concern of a new wave of Covid-19 across the province.”

According to a report published in the state-run Jahan-e San’at daily, “The cost of Covid-19 medical care is back-breaking, especially for poor families who have several members contracting the virus. Therefore, coronavirus kills more people among the poor… Despite the fact that the death toll and the number of new cases are declared by the Health Ministry, there is not one empty bed in Tehran’s hospitals.”