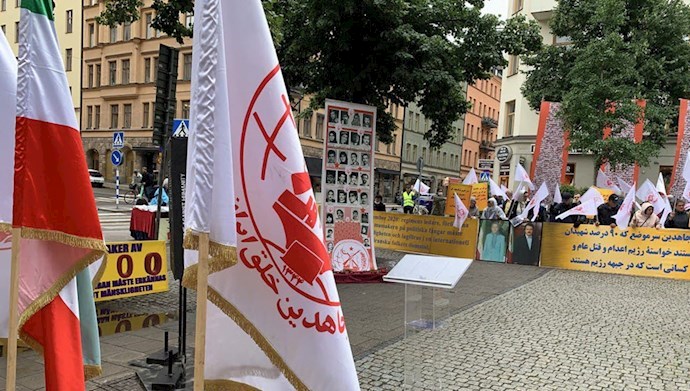 On Tuesday, Hamid Noury’s first hearing was conducted in Stockholm, Sweden. Noury, a senior prison guard in Iran’s infamous Evin and Gohardasht prisons in the 1980s, was involved in a number of crimes against political dissidents, especially members and supporters of the People’s Mojahedin of Iran (PMOI / MEK Iran). As one of the authorities of Gohardasht prison in 1988, he carried out mass killings of political detainees as part of a nationwide purge of dissidents in Iran’s jails.

Noury was detained in Sweden in 2019

Noury was detained in Sweden in 2019 while on vacation. When his trial began earlier this year, the court heard harrowing testimony from his victims and their relatives. Noury’s trial is providing a window into the massacre of 1988 as well as the regime’s many other atrocities.

In his introductory remarks, Noury hailed the regime’s criminal leaders, including supreme leader Ruhollah Khomeini. Ebrahim Raisi, dubbed “the butcher of 1988” by Iranians, was referred to as “the popular president of the Iranian people.” by him. Raisi was a key figure in the 1988 massacre and was a member of the Death Commission, a group of authorities responsible for signing hundreds of death sentences.

Noury also praised and referred to the regime’s now-dead terrorist mastermind, Qassem Soleimani, as a martyr. “I felt like the world broke on my head when [Soleimani] was insulted,” Noury said, referring to one of the witnesses who called Soleimani a criminal.

His animosity of the MEK was diametrically opposed to his admiration for well-known criminals. Noury mirrored the regime’s anti-MEK propaganda, which has been spread via official channels and international lobbying.

“There is a group known as the People’s Mojahedin, but no one in Iran recognizes them by that name. ”

“All Iranians refer to them as ‘Monafeghin’,”Noury commented. “I apologize to the Iranian people if I called them Mojahedin in my remarks.”

According to his own account, he volunteered to go to Kurdistan in 1979 to suppress the Kurdish people. He was afterward drafted into the Bassij, a paramilitary force tasked with repressing dissenters.

Noury also rejected the massacre in 1988, describing it as a “fabricated and undocumented story” and a “ridiculous play.”

It’s important emphasizing that such assertions aren’t made by regime officials themselves. Raisi has made no apologies for his role in the 1988 executions of political prisoners. Mostafa Pourmohammadi, a former Justice Minister and member of the Death Commission, has admitted to his role in the 1988 massacre. There are records indicating that the regime buried executed inmates in mass graves. The murders are supported by thousands of eyewitness testimony. Ayatollah Hossein Ali Montazeri, Khomeini’s successor at the time, is also heard criticizing the Death Commission for mass killings of political captives.

Noury claimed that the prison of Gohardasht did not exist

Noury even claimed that the prison of Gohardasht did not exist. “There is no such thing as a Gohardasht prison; this is a historical fabrication put up over the last three decades,” says the author “He made a remark. “In Iran, if you say Gohardasht, people will laugh at you.”

Noury did explain, however, that his boss was Nasserian, a well-known judge whose real name is Mohammad Moghiseh, who has been blacklisted for human rights breaches.

Noury’s controversies are simply demonstrating that he is unable to defend his position at this time. Noury, on the other hand, is just one of many regime officials who must face justice for their crimes. In this case, the genuine perpetrators are the regime’s supreme leader Ali Khamenei, Raisi, and other senior officials, whose involvement has been clearly documented by the MEK and international human rights organizations.