Stop Fundamentalism – Five members of a student organization associated to Ferdowsi University in Meshad have been arrested.  The names of those arrested are, Mohsen Sanati-pour, Shayan Saremi, Amin Riyahi, Mehdi Khosravi, and Eftekhar Bozorgian. 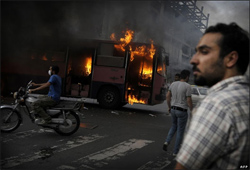 The student activists were all supporters of Mehdi Karubi. Karubi was one of the presidential candidates in the recent election and a member of the ruling clergy in Iran.  He has been rather outspoken regarding the election results.

According to reports, no one knows how and why the students were arrested as well as where their whereabouts are.

Two of the students, Mehdi Khosravi and Amin Riyahi are the same students whose student status were suspended for one term and spent two weeks in jail for criticizing Ahmadinejad.