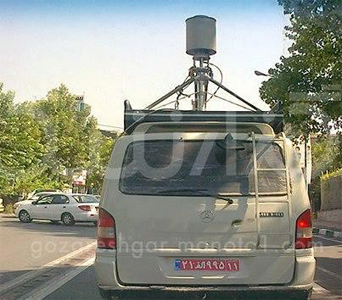 Stop Fundamentalism – Iranian Minister of Communications and Information Technology, said today that his ministry does not know the origin of satellite jamming which is disrupting the country’s communication and also satellite program broadcasting.

Reza Taghipour, Iran’s minister of Communications and Information told reporters today that his ministry is making an extensive effort to find the source.

“We are actively pursuing this issue. Definitely need to look for the source of distortion since it has a highly negative effect and consequences,” said Taghipour referring to the extensive health hazards the radio waves pose to the public health. The waves could cause complications and major diseases for the human body.

In recent days picture of devices mounted on vehicle tops journeying through Tehran city have been distributed over the internet.

These waves can bring complications and diseases to the body. Now there is growing concern that the waves are not broadcast based on any laws and it is not clear who is responsible for them.”

Iran has been blocking a considerable number of satellite programming broadcasts from abroad for years, especially that of news channels that provide unsecured information to the Iranian public.