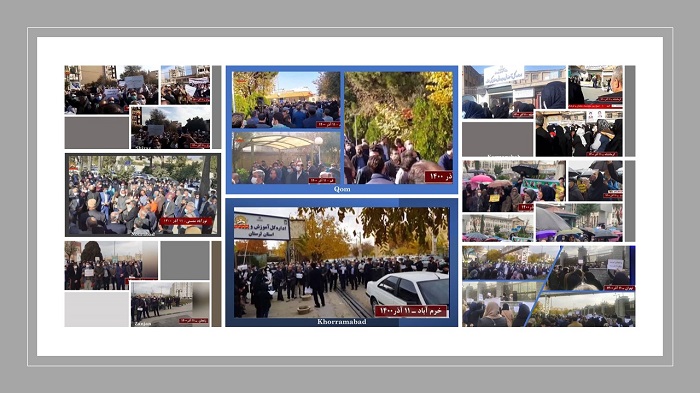 According to the Iranian opposition group The National Council of Resistance of Iran (NCRI), and the People’s Mujahedin of Iran (PMOI / MEK Iran), on Thursday, December 2, 2021, teachers in 66 cities (28 provinces) rallied to protest against the deplorable living conditions.

On Thursday, teachers rallied across Iran to protest against the deplorable living conditions due to their low salaries, skyrocketing prices, and the regime’s disregard for their legitimate demands.

Protesting teachers carried pictures of the November 2019 uprising martyrs. To prevent the demonstration, in Tehran, the repressive State Security Force (SSF) attacked the protesters, tore down the martyrs’ pictures, and prevented the protesters from filming.

They also arrested several teachers. In Mashhad, repressive forces violently beat the teachers to disperse them. In Gorgan, teachers symbolically patched one eye in solidarity with tens of Isfahan protesters, who were shot in the eye by the SSF and the IRGC last Friday.

In some cities, including Ardabil, the teachers’ protest was held despite freezing snowy weather.

“We will not surrender, nor give up, we demand the ‘Ranking Act’ to be implemented,”

“Imprisoned teachers must be released,”

“We will not give up until we obtain our rights,”

“No nation has ever experienced so much injustice,”

“Teachers silence results in more oppression, teachers are awake, and outraged by discrimination,”

“Freedom-loving teachers, the only solution is to raise your voice,”

“Break your silence, stand up for your rights,”

“If our problems are not dealt with, we will not go back to classes,”

“Prison is not a place for teachers,” and “If embezzlement would be dealt with, our problem will be resolved.”

The arising freedom-loving teachers and educators

Referring to the arising freedom-loving teachers and educators across Iran, Mrs. Maryam Rajavi, the President-elect of the National Council of Resistance of Iran (NCRI), said: With chants of, “Teachers will die but won’t submit,” and “No nation has ever experienced so much injustice,” they echo the cries of a nation who is fed up with the mullahs’ oppression and injustice.

Khamenei, Raisi, and his cabinet of IRGC terrorists and torturers squander the Iranian people’s assets to make bombs, missiles, and drones. Thus, they keep teachers and other sectors of society under the poverty line. The only way to confront the mullahs’ oppression is to rise up. Only the outright rejection of religious fascism and establishment of democracy and national sovereignty can end poverty, corruption, high prices, discrimination, and injustice.