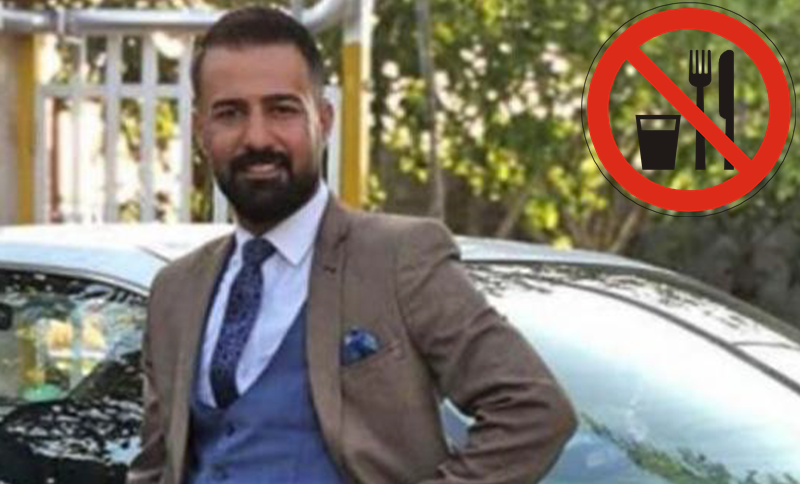 Iranian political prisoner Peiman Mirzazadeh went on hunger strike yesterday to protest his unfair sentence of two years in prison and 100 lashes for the charges of “blasphemy” and “drinking alcohol”.

Mirzazadeh, who is being held in Urmia Prison in northwestern Iran, started his hunger strike the day after being flogged. Mirzazadeh was transferred to the 4th Branch of the Sentence Implementation Department on Sunday, where he received 100 lashes.

His body is now heavily swollen, particularly his back and feet, and he is in poor health overall.

He had previously been sentenced him to two years of prison, 80 lashes for “blasphemy”, and another 20 lashes for “drinking alcohol” by the 110th Branch of the Urmia Public Court.

Mirzazadeh had previously been sentenced to two years in prison for “cooperating with a dissident group”. He was arrested by security forces in 2017 on the charges of “spreading propaganda against the state” by singing songs in support of a dissident group. He was given a six-month prison sentence and was denied the right to a lawyer.

Iran s the only country on earth that hands down harsh punishments to its citizens regardless of age, with the Regime even hanging child offenders in spite of international condemnations. The Regime does not even consider flogging as torture and routinely sentences people to lashes, most often for so-called morality offences.

As an example, the Regime recently sentenced a 17-year-old boy to 100 lashes for reportedly sexually abusing an 11-year-old boy, even though the younger boy’s parents had withdrawn their complaint against him. This means the real culprit may go unpunished.

Shortly before that, an unknown number of people were sentenced to 74 lashes each for not observing the regime’s compulsory veil. They were taking a holiday in Mazandaran Province, in northern Iran, where they were caught without the forced veil on a boat in Lafour Lake.

Teachers’ rights activist Hamidreza Rahmati was also recently sentenced to 74 lashes and a prison sentence for arranging a sit-in outside a government building to protest the widespread arrest of his fellow activists. Rahmati, who is a member of the Isfahan Teachers’ Association, was sentenced to 18 months of prison and 74 public lashes by the 103rd branch of the Shahreza Penal Court for “disrupting public order by carrying out an abnormal act outside the Education Department building”.