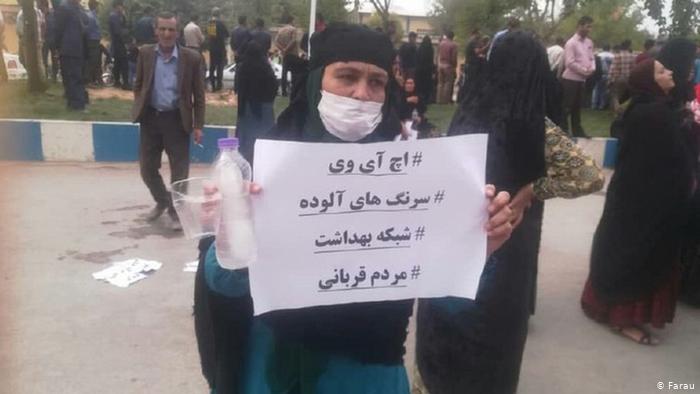 According to reports from supporters of the People’s Mojahedin Organization of Iran (PMOI/MEK) inside of Iran, following the widespread protests against infection of more than 300 inhabitants of Lordegan in Charmahal & Bakhtiari province, southern Iran, with the HIV virus, the Iranian regime’s suppressive forces attacked and opened fire on angry protesters.

The protesters attacked the governorate and health center buildings. The Iranian youth burned the office of the Friday prayer Imam and chanted “No to Gaza, no to Lebanon, I sacrifice my life for Iran.”

“The attacks of the revolutionary guard against demonstrators are savage and we need help,” said one of the protesters.

Last week the MEK website reported that more than 300 inhabitants of the Lordegan county in Charmahal & Bakhtiari province, southern Iran, became inflicted with AIDS due to negligence of Iranian officials in the regime’s Health Ministry.

Dozens of locals held a protest rally on Wednesday in the aftermath of this incident. The crowd, mostly women, gathered in front of the governor’s office and the Health Ministry branch in Lordegan.

The crisis started when reports surfaced that Health Ministry employees used infected syringes for blood sugar tests, resulting in the virus being transferred to many residents in the Chenar Mahmoud village.

Locals say that many in the village are refraining from any other blood tests due to the fact that they are inflicted. People say that one out of three locals in the village is now inflicted with the AIDS virus. Anyone who has taken the test has turned out to be HIV- positive and inflicted with the deadly virus. People in Chenar Mahmoud are now raising so many questions, such as why does the Health Ministry need to test a nine-year-old child for cholesterol and blood sugar, leaving the kid now inflicted with AIDS.

“The Health Ministry came to our village for free blood sugar and insulin tests. The syringes they employed had already been used and were infected with a virus,” a villager said. “Now, after a few weeks, they’ve brought in a doctor from Tehran to test the residents and figure out the type of virus,” told the villager.

Another resident said, “Up to now, 500 inhabitants have been tested for HIV and they’re all affected. The Health Ministry is not shouldering any responsibility for anything. Officials are saying we did not distribute the syringes. Local authorities are not taking responsibility either and are blaming government health authorities.”