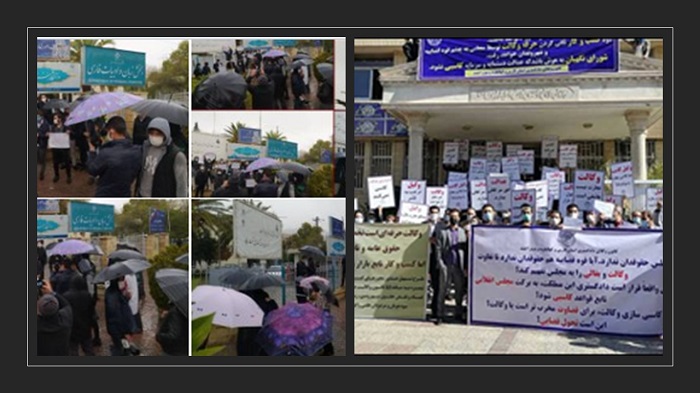 Since 26th November, protests have been taking place across Iran. The  People’s Mojahedin Organization of Iran (PMOI / MEK Iran), and the National Council of Resistance of Iran (NCRI), has been reporting on the situation, stating that various workers and sectors of society have been taking to the streets to voice their outrage at the situation they have been left in.

MEK supporters report that the cargo workers at the Port of Khomeini in southwestern Iran gathered on Thursday 26th November in protest against their low wages, their poor and strict working conditions, the non-payment of their claims, the inadequate health protocols, and the non-implementation of a job classification plan. The workers are entitled to benefits because of the harsh climatic conditions they have to endure, including extremely high summer temperatures for part of the year.

#MEK report Workers at the Haft Tappeh continued with their protest rallies, the workers drawing attention to the poor working conditions they are subjected to, as well as the extensive delays in the payment of their salaries and the lack of permanent and stable contracts.#Iran pic.twitter.com/NcLFhP8fQf

MEK supporters report that on the same day, workers from Kenzol Mall, also known as the Arvand Commercial Complex, in Khorramshahr in southwest Iran, gathered to protest against the non-payment of their wages. One of the workers participating in the protests said that there are around 40 workers at the complex with six-eight years of history there. Wages have not been paid for three months now, despite their numerous demands and frequent protests. The worker said that they have been told that they should be paid by the contractor and not the complex, but they are still waiting. In the meantime, these families are struggling to make ends meet.

MEK supporters report that on Saturday, dozens of workers at a reservoir dam site in Bijar in the province of Gilan gathered to protest against the non-payment of their wages for 14 months. They also expressed their discontent at the dismissal of some of their colleagues who were not paid 6 months of due salary payments.

MEK supporters report that the nurses in Sanandaj in the northwestern part of the country protested in front of the Kurdistan Province Health Department demanding that their overdue wages are paid. These nurses, like many other nurses across the country, have not been paid for several months despite the huge sacrifices they have made to help those suffering from COVID-19. In this case, the nurses have not been paid for at least 12 months.

MEK supporters report that the municipality workers in Yasuj in the province of Kohgiluyeh and Boyer-Ahmad protested for the same reason. They too are struggling to make ends meet, especially during the health crisis where they have worked tirelessly. Many have not been paid for nine months. Their insurance premiums have also not been taken care of meaning that they are having difficulties getting medical care or renewing insurance medical records.

The economy of Iran has been destroyed by years of mismanagement and corruption and it is the people that are suffering the consequences.

Iran-To protest a recent bill by the Iran regime’s parliament against the primary rights of the lawyers, they gathered in protest in Kermanshah and Khuzestan provinces. pic.twitter.com/LmfMbmuByV