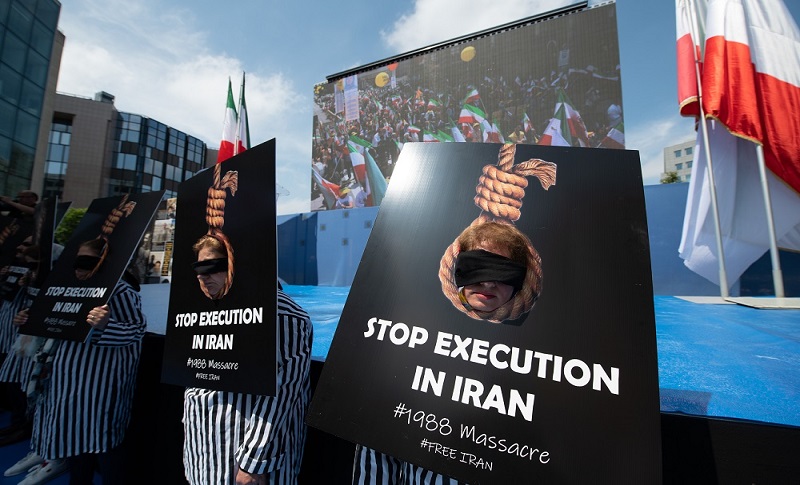 According to a UN report, the regime of Iran has executed at least 12 child offenders since the start of 2018, and more than 90 others are currently on death row awaiting their death sentence.

Iran is the world leader in death sentences per capita and is the main executioner of juvenile offenders.

According to the latest findings of the UN’s special rapporteur on human rights in Iran, Javaid Rehman, seven of the people Iran executed in 2018 were juveniles, which is a blatant breach of international norms and values.

The Iranian regime allows boys as young as 15 and girls as young as 9 to be executed. Meanwhile, crimes judged under qisas, or retributive ‘eye for an eye’ justice, carry the same sentences for all – meaning child offenders can be punished with death for the crime of murder.

One of the child offenders put to death in 2019 was Zeinab Sekaanvand, the fifth execution of a child offender this year. Sekaanvand, a victim of domestic violence, was convicted of murdering her husband at age 17. She had been forced to make a false confession and was denied access to a lawyer.

“The bottom line is that she was a juvenile at the time the offense was committed, and international law clearly prohibits the execution of juvenile offenders,” Bachelet.

Sadaf Mirzai: “We are the voices of Iran’s youth who won’t be silenced by the regime. The Iranian regime is the only country that continues to execute children. We support the MEK’s Resistance Units who are the harbingers of a brighter future.” #March4RegimeChangeByIranians pic.twitter.com/6wJPMIysRU

Mr. Rehman said he was “alarmed” by her execution, adding that her trial raised “numerous due process concerns.”
He added that he “appealed to the Iranian authorities to abolish the practice of sentencing children to death and to commute all death sentences issued against children in line with international law.

In total, since 2013, 21 children have been sentenced to death in Iran.

In a conference held in the European Parliament on Wednesday, MEPs called for a firm stance on Iran’s human rights abuses and demanded European countries to condition their relations with Iran on the improvement of human rights conditions.

In the conference, Mrs. Maryam Rajavi, the president-elect of the National Council of Resistance of Iran (NCRI), said, “Since 2013, when Rouhani became the regime’s president, some 4,000 persons have been executed.”

“The European Union must predicate trade and tie with the Iranian regime on the end to executions and torture in Iran,” Mrs. Rajavi added.