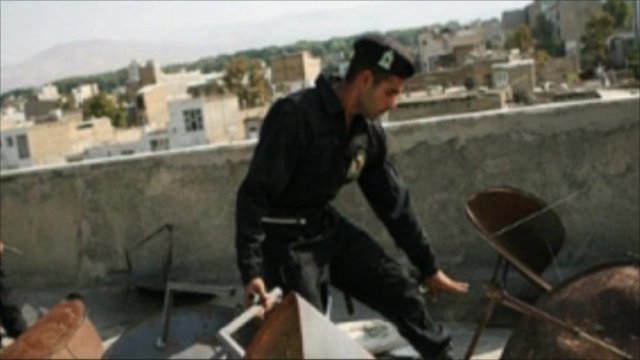 Stop Fundamentalism – Iranian human rights news agency, an in exile news provider, reported today that head of police in Mazandaran province has reported the confiscation of 600, 000 piece of satellite program receiving equipment in this province.

According to the Iranian state-run news agency ISNA, Tagavi, the head of Mazandaran Police told reporters that, “The plan to collect satellite dishes and equipment in the Mazandaran Province is in-line with plans to raise Security in the country.”

He said that police has identified and providers of equipment in the city and also unauthorized users.

Iranian regime has been hard on satellite television viewers throughout the country as a way to limit information flow from outside of the country.

The arrests and confiscations of equipments in this regards are usually with excuses such as that satellite TV provides indecent programming and damages the Islamic culture.   But in reality the main targets are those who watch Iranian dissidents programs broadcast from abroad.

According to Iran’s officials, exile TV program viewers have grown considerably during the past few years.  Some speculate the numbers to be as much as 75 percent of the total television viewers in Iran.

Iranian state-produced television programs are mainly unappealing and they have not been able to catch the attention of Iran’s ever growing youth population.