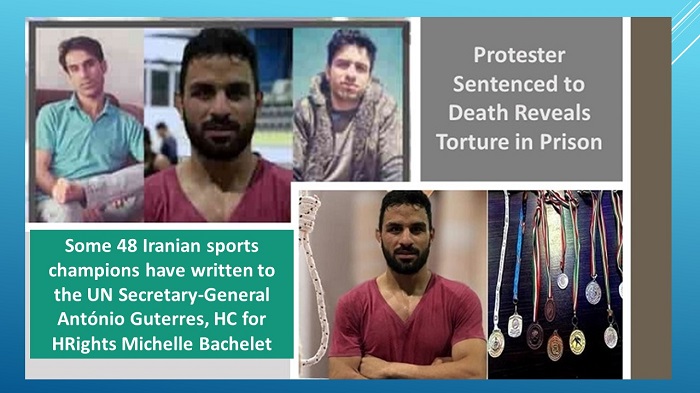 They wrote: “We, the undersigned are calling on all Athletes, Olympians worldwide to support our call and do whatever in their capacity to help save [Afkari’s] life. Your support will show that the people of Iran and their Athletes are not alone in seeking justice and human dignity.”

Afkari, 27, was given two death sentences, as well as 6.5 years in prison and 74 lashes for protesting in August 2018. His brothers, Vahid, 35, and Habib, 29, were sentenced to 54.5 years and 27 years’ imprisonment respectively, as well as and 74 lashes each. Their petitions for a retrial was denied.

The letter read: “Execution of Athletes, Champions and Olympians in Iran by the ruling regime is not new. Many Athletes have been executed to date only because they had responded to the voices of their conscious and their Athletic duties when it comes to oppression of people by the regime. The regime in Iran cannot tolerate popular figures in Iran.”

The sporting champions called on the people they wrote to, as well as the international community as a whole, to do whatever they can to save Afkari’s life before time runs out.

The letter read: “Your action also sends a strong message to the regime in Iran that they cannot kill Iranian heroes only because they had exercised their most basic human rights and more that the world is watching. Your high offices should also make the regime understand that should they continue with this barbaric execution; you would impose serious sanctions on them.”

The signatories, who are all members of the National Council of Resistance of Iran (NCRI), include:

There is a wave of protests and criticism from inside Iran and across the globe over the criminal execution ruling issued for Navid Afkari, and long prison terms for his two brothers, Vahid and Habib.#SaveNavidAfkari#اعدام_نکنید https://t.co/3ISOjehgEs

To read the full letter and view the signatories, click here.

In connection to the clerical regime’s brutal tortures on Afkari brothers for forced confession, Mrs. Maryam Rajavi, the President-elect of the National Council of Resistance of Iran (NCRI), said: The vicious tortures inflicted on Navid Afkari and his brothers are outrageous. I call on everyone to rise in support of the Afkari brothers and convey their voice and the Iranian people’s cry for freedom throughout Iran.

I urge my compatriots in Fars, particularly the brave youth, to rise and protest the criminal rulings. And I reiterate the need for an international delegation to visit #Iran prisons and speak to prisoners, particularly to political prisoners and detained protesters.

We join the world in outrage at the Iranian regime’s death sentence for Navid Afkari, who was tortured into giving a false confession after participating in peaceful protests in 2018. The regime also tortured his two brothers and sentenced them to decades in prison. Let them go!

We join the world in outrage at the Iranian regime's death sentence for Navid Afkari, who was tortured into giving a false confession after participating in peaceful protests in 2018. The regime also tortured his two brothers and sentenced them to decades in prison. Let them go!