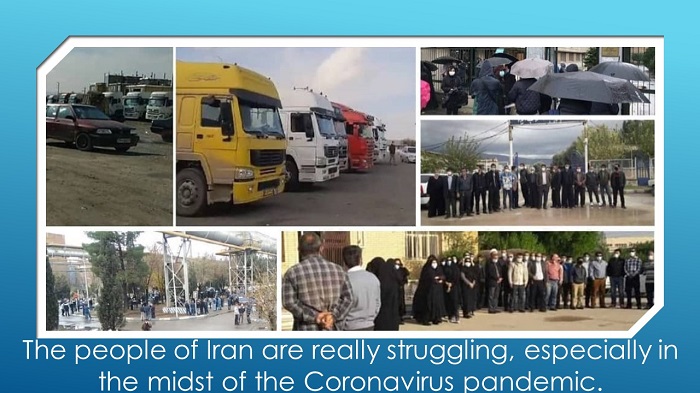 Between the 5th and 8th December, many people across Iran took to the streets in protest against the tough conditions they are battling with and the regime’s inaction and mismanagement.

The main opposition to the Iranian regime – The People’s Mujahedin of Iran (PMOI / MEK Iran) and the National Council of Resistance of Iran’s (NCRI), – has been reporting on the protests over the past few days, emphasizing that discontent in the country is high and that many sectors of society are fed up.

(#PMOI /#MEK #Iran), It is no wonder the people of Iran are desperate to see the regime fall. In November last year, a major uprising ensued after widespread protests broke out when the regime announced a huge increase in fuel prices.https://t.co/XmDl9Fdkas pic.twitter.com/vp3jtzmNls

The people of Iran are no strangers to dealing with the consequence of the regime’s mismanagement and corruption and they have made this the focus of many strikes and protests in the past few years, and even decades.

On Saturday 5th December, (PMOI / MEK Iran) supporters from the city of Kermanshah and Arak reported that the drivers of fuel tankers continued with their strike for the tenth consecutive day in numerous cities and terminals, including in the cities of Kermanshah and Arak. The drivers are calling for higher fares. The cost of spare parts is high and is increasing, plus the general costs such as that of food, are meaning that the drivers (who often transport fuel to Iraq) are not making a living at all. The drivers have said that they are going to continue striking until their demands have been met.

It is estimated that more than 500 tankers are striking in southwestern Iran.

On the same day, (PMOI / MEK Iran) supporters from the city of Yasuj reported that around 50 workers at the Yasuj Freight and Passenger Transportation Organization gathered in protest because they have not been paid their salaries for eight months. The workers said that even when workers are paid on time, it is still not enough to make ends meet, therefore not receiving wages for eight months is having a massive impact.

The following day, (PMOI / MEK Iran) supporters from the city of Isfahan reported that the workers from the Isfahan steel company protested for several reasons including low pay, high rates of inflation, and the lack of action on the part of the authorities to resolve conflicts.

Also on Sunday, (PMOI / MEK Iran) supporters from the city of Mahshahr reported that the faculty members and academic staff at the University of Mahshahr Azad gathered in front of their workplace for the second day. They too are protesting their low wages and have called for the payment of salaries that are already a month overdue.

(PMOI / MEK Iran) supporters from the city of Tehran reported that the Ph.D. students in Tehran gathered to protest the decision to evacuate university accommodation because of the Coronavirus outbreak.

(PMOI / MEK Iran) supporters from the province of Khuzestan reported that the workers gathered for the second consecutive day because of their salaries that have not been paid for four to five months. They slammed the officials of the Water and Sewerage Department for neglecting them at a time of crisis.

The people of Iran are really struggling, especially in the midst of the Coronavirus pandemic. The regime’s mismanagement and negligence are astounding and the people have literally been left to fend for themselves. All the while, the regime plunders hundreds of millions of dollars on malign and belligerent activities. Its actions are shameful.