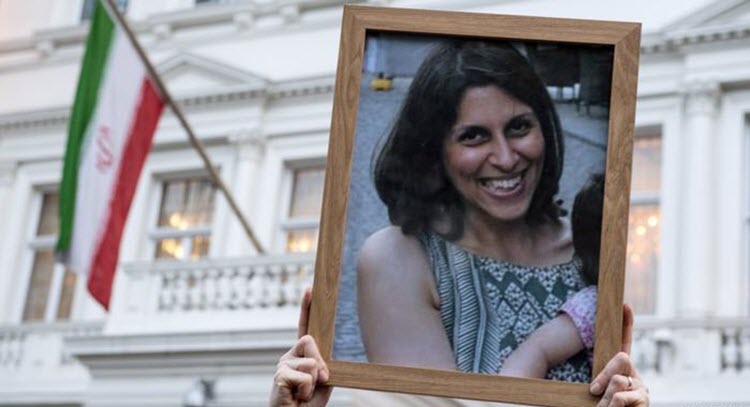 Ms. Nazanin Zaghari-Ratcliffe is a 37 year-old British-Iranian charity worker who was detained by the Iranian regime’s Islamic Revolutionary Guards Corps (IRGC) last year. She spent most of her time – a large period of which was before charges were filed – in solitary confinement.

Ms. Zaghari-Ratcliffe was travelling back to London where she lives after spending two weeks visiting her family in Tehran. Her baby, who was one year-old at the time, was with her when she was stopped by authorities at the check-in desk at the airport.

Her daughter was taken away from her and Ms. Zaghari-Ratcliffe was taken to a detention centre in the Kerman Province, around 1,000 km away. Both of their passports were taken.

At the time, her husband, Richard Ratcliffe, appealed to the British government and Prime Minister David Cameron to call on Iranian authorities to release his wife, but no action was taken against the “outrageous and arbitrary” detention.

Mr Ratcliffe spoke about his wife’s daily interrogations and said that she was being denied access to lawyers.

Her daughter, Gabriella, was passed over to Ms. Zaghari-Ratcliffe’s family in Tehran and she was not allowed to see her.

She was also forced to sign a confession under duress.

Iranian authorities eventually declared that Ms. Zaghari-Ratcliffe was being held on grounds related to national security. She was sentenced to five years in prison and in January an appeal was rejected by the courts.

Last month her family and friends marked the 12 month anniversary of her arrest with a gathering in London. Ms. Zaghari-Ratcliffe spoke about her wishes for freedom and seeing her daughter, as well as a world with justice.

The final appeal was made recently, but the family have just heard that it was rejected, meaning that there is no chance of having her sentence overturned.

The head of Tehran’s justice department confirmed that the final appeal had been rejected and said that “appeals court approved the verdict by the primary court”. Nothing more was officially said about the matter.

Iran, which does not recognise dual nationality, has been detaining people in circumstances like this for many years. Amnesty International and other human rights organisations have called the Islamic Republic out for such actions, but to no avail.

An Iranian-born scientist and resident of Sweden was arrested in Iran last year while he was attending a conference. The latest reports suggest that Ahmadreza Djalali may now be facing the death penalty. Again, he is being detained on trumped up charges.