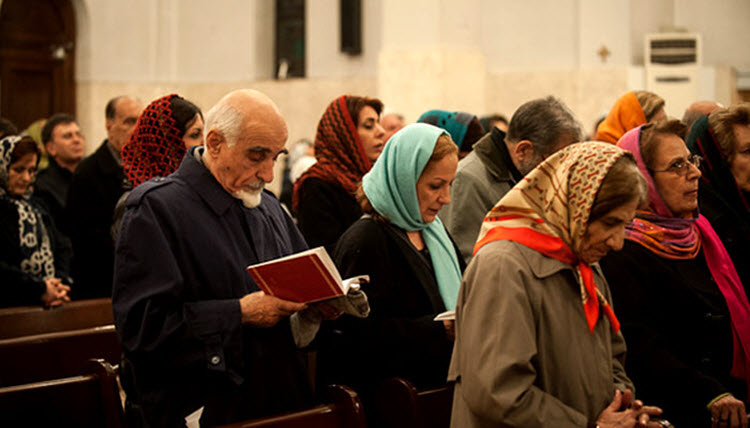 Ms. Donya Jam, an Iranian-American Christian and human rights activist, wrote an article for The Hill about the plight of Christian Iranians. She pointed out that Christians have existed in Iran for centuries and many religions – Muslims, Jews, Zoroastrians, etc. – have lived together in harmony. “We were all Iranians and our religion was not an issue at all.”

However, after the ayatollahs came into power in 1979 everything changed and religious persecutions became the norm. Religious restrictions became increasingly institutionalised causing many Jews and Christians to flee the country. She adds that some stayed in Iran and have been given “token representation in parliament” so that the mullahs’ regime can claim to be legitimate.

When the “moderate” President Hassan Rouhani came into office nothing improved for the Christian minority in Iran. In fact, a report in 2015 by the U.S. Commission on International Religious Freedom actually indicated that there has been an increase in religious persecution with more religious minorities in jail.

Obama and his administration often pointed out that Rouhani was a “moderate” compared to past leaders of Iran, and they used this to sell the nuclear deal to the people. However, the nuclear deal appears to have emboldened the regime into taking its repressive behaviour to the next level. Jam said: “A successful policy vis-a-vis the regime in Tehran has seemingly eluded Republicans and Democrats for the last 16 years.”

She adds that now is the time for something new to happen, especially for the Iranian people. The threat of terrorism at home and abroad is real and there is no easy solution, she explains, but the problem cannot be ignored.

The Iranian regime, she said, is the common denominator with the rise of ISIS and the instability and spread of fundamentalism in the region. “No one can deny this. Yet at every turn in the past eight years we were told that the only solution is one which engages the mullahs and strengthens their grip on power. The time for such thinking is at an end.”

Jam points out that the Iranian regime is incapable of change – this has been proven time and time again. Dissidents are brutally repressed and its policy in the region is extremely aggressive. A way to confront this has yet to be defined, but it needs to involve changing the behaviour of the regime permanently so that the rights of the Iranian regime are respected. She also said that the organised resistance of the Iranian people should be the negotiating partners with the U.S.

“The principal opposition to the Iranian theocracy, the People’s Mojahedin Organization of Iran (PMOI/MEK) is one such organization. The MEK has long served as an example of an organization whose principal aim has been to combat Islamic fundamentalism and terrorism that emanates from it. Khomeinists engaged in widespread repression of the MEK, and the West remained silent as they executed tens of thousands of MEK activists.”

She explains that the National Council of Resistance of Iran (NCRI), of which the MEK is the most integral part, is working towards a secular Iran. Its leader, Mrs. Maryam Rajavi, is striving for the antithesis of the Islamic fundamentalism that currently plagues Iran.

“Mrs. Rajavi advocates for a new future for Iran. This includes a ten point plan for a democratic secular republic free of nuclear weapons, capital punishment, and tolerant to all religions, ethnicities and ideas. This plan would not only end the threat of Iran’s nuclear program, but would usher in a new era of cooperation and stability between the United States and Iran, as well as the entire region. It would address instability from Syria to Yemen and all throughout the region. The new administration has a historical opportunity for a historical change in one of the hotspots in the world. The new approach is both moral and politically savvy.”