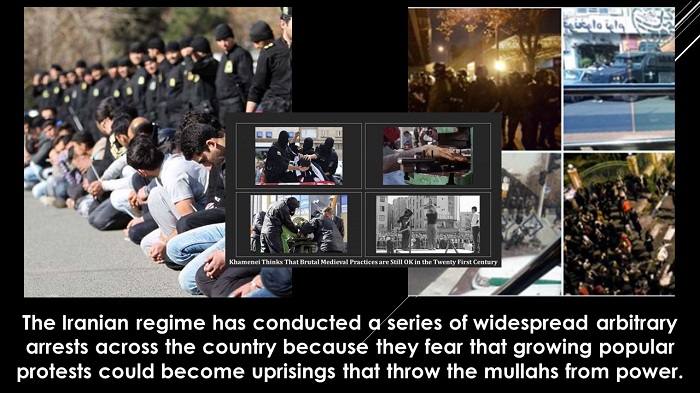 The Iranian regime is stepping up its suite of repressive measures in the period leading up to the anniversary of the November 2019 protests. The latest maneuver is to threaten the family members of those who were injured, killed, or arrested for taking part in the protests last November.

The threats range from outright thuggish violence to questioning and the closure of cemeteries where martyrs of the protests were buried.

Reports are coming into the National Council of Resistance of Iran’s (NCRI) and the People’s Mojahedin Organization of Iran (PMOI / MEK Iran) from those who have been affected in Iran.

One MEK supporter report is of agents from the Ministry of Intelligence and Security (MOIS) threatening a family not to have any kind of memorial for their murdered son. The martyr’s mother said: “The MOIS summoned my husband and son a few days ago. They [MOIS agents] have threatened them against using any hashtags on social media related to the November uprising. They even arrested a friend of my late son, who had only uploaded Mohammad’s photo with a hashtag related to the uprising. After questioning him, they [MOIS agents] confiscated his cellphone.”

In another incident reported to the MEK the road into the Behesht-e Rezvan cemetery where many martyrs slaughtered during the protests in Behbahan was closed off. MOIS agents were responsible for the closure.

More than 1,500 protesters were killed by Iranian state security forces and the Revolutionary Guards (IRGC) during the protests. Reuters confirmed in a special report on December 23, 2019, about the deadly crackdown on November nationwide protests in Iran the death toll of 1500 that was announced by the People’s Mojahedin Organization of Iran (PMOI / MEK Iran) on December 15, 2019.

The regime is worried that the restive population of Iran may attempt to repeat the protests or spark new protests as a result of holding commemorations for those slaughtered. Iran is a tinder box seething with suppressed anger at the regime’s brutality and incompetence. It was bad enough a year ago, but the underlying conditions that led to the protests last November have actually worsened as many people have died unnecessarily because of the botched response to the pandemic and economic conditions for many have worsened further.

Amid increased repressive measures by the Iranian regime, the State Security Force (SSF) tortured and killed a 28-year-old man named Mehrdad Sepehri in the city of Mashhad with tasers and pepper spray.#Iran#HumanRightshttps://t.co/8MZbsILqP5

Other reports from MEK families inside Iran say that the repressive tactics adopted by the regime follow:

Mrs. Maryam Rajavi, the president-elect of the National Council of Resistance of Iran (NCRI) has referred to the stepping up of repression by the regime when she said: “The clerical regime tortures and humiliates young people in Iran streets. Black-clad guards encircle and brutalize youths, battering their human dignity in a bid to prevent the outbreak of our nation’s wrath. But they only add fuel to the fire by such desperate measures.”

Even state-run media caution against using repressive tactics to try and suppress the people’s anger at deteriorating socio-economic conditions. For example, the Sharq daily said this on October 26th: “The country’s critical economic and social conditions have paved the way for developing rage and violence. If the government, law enforcement, and judiciary do not take such a situation seriously, this field of wrath will become widespread.”