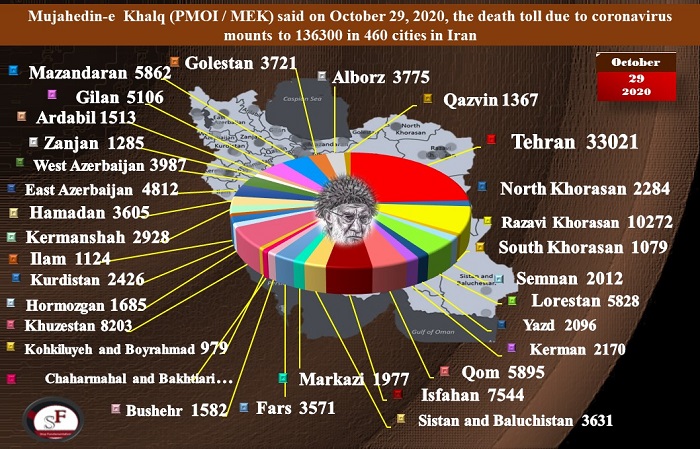 After the National Council of Resistance of Iran’s (NCRI), and the People’s Mojahedin Organization of Iran (PMOI / MEK Iran), announced that the Coronavirus death toll in Iran had surpassed 136,300. Maryam Rajavi, the leader of the Iranian Resistance, spoke out again about the increasing number of patients and victims.

Maryam Rajavi called it the “direct outcome of the inhumane and unpatriotic policies of [Supreme Leader Ali] Khamenei and [President Hassan] Rouhani”.

Maryam Rajavi said: “Human lives are completely worthless in their eyes… while the regime spends exorbitant amounts of money on procuring smuggled weapons, its nuclear and missiles projects, and warmongering, the export of terrorism and fundamentalism, Iranian workers, nurses, medical personnel, white-collar workers and teachers cannot afford basic daily needs due to the unhinged inflation.”

#HumanRights, freedom and the desire of the Iranian people for change and establishment of a republic based on universal suffrage is at the core of the Iranian issue. #Iran pic.twitter.com/mTBKgnp4eE

More than 136,300 people have died of the novel #coronavirus in 460 cities checkered across all of Iran's 31 provinces, according to the Iranian opposition PMOI/MEK.

Of course, the Health Ministry claims the death toll is only around a quarter of that, but they did report higher fatality levels overnight than at any other point in the pandemic and their fake statistics show that fatalities have doubled in less than three weeks. Not only that but they are seeking to control information, while Rouhani saying that because various officials have made conflicting statements, there is now just one spokesperson whose statements should be listened to by the public. (A dangerous propaganda method.)

At a time when the #coronavirus tragedy is becoming more widespread in #Iran and, the hygiene and health conditions deteriorates in Iran’s prisons. Inmates are deprived of the most basic means to protect themselves against the dangerous virus.https://t.co/gSutIm3iwM

Maryam Rajavi said: “[People are suffering in so many ways] while entities controlled by Khamenei have amassed more than a trillion dollars worth of assets belonging to the Iranian people. These funds remain untouched. The control of these entities must be turned over to the Iranian people. Moreover, one-armed forces are enough for the regime. The Islamic Revolutionary Guard Corps (IRGC) and the paramilitary Bassij must be dismantled and their budgets must instead be re-allocated to the fight against the Coronavirus.”

The same entity that has keep trillion of dollars worth of assets that belong to the Iranian people is funding the #IRGC that shoots protesters dead, but has given nothing to fight #COVID19
We hold Khamenei accountable @DrTedros @WHOEMRO https://t.co/jbrmfPtQyZ pic.twitter.com/sOQBqpGNN5

Just five weeks ago, Maryam Rajavi made a statement after the death toll hit 106,800. She said that the regime was rubbing salt into the people’s wounds by blaming them for the pandemic, as if they weren’t washing their hands or wearing masks, when the regime had done nothing to control it, once again citing the $1 trillion of the people’s plundered wealth held by Khamenei.

As the regime officials in #Iran acknowledge that the entire country is red with respect to the pandemic, Khamenei says that it is the people who must do their duty in fighting the disease,adding salt to the injury of millions of bereaved & sick Iranians &their families #Covid_19

Maryam Rajavi  said: “The spread of the Coronavirus catastrophe, which, according to the regime leaders, has put the whole country in a red situation, and the number of infected and mortalities are increasing every day, is the result of the criminal policies pursued by Khamenei and Rouhani, including forcing workers and laborers back to work and reopening schools in the absence of minimum sanitation, and holding Muharram mourning ceremonies.”