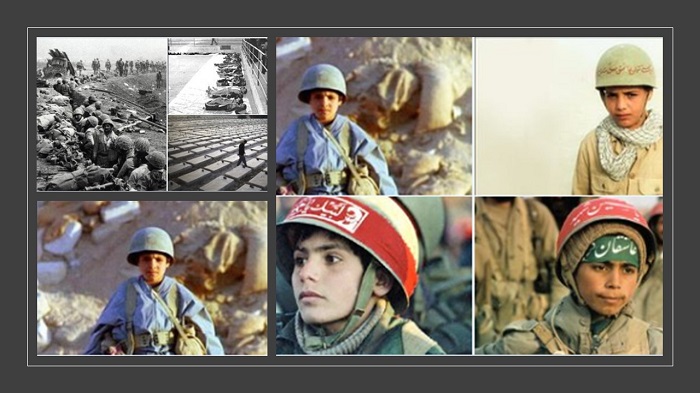 September 22nd is the 40th anniversary of the start of the Iran-Iraq War.  Even though it has been over for many years the mullahs still warmonger and plunder the country’s natural resources for its own gain.

Despite the potential of the 1979 revolution, the mullahs used their power to establish a reactionary interpretation of Islam. However, as time has passed not everyone is in favor of a theocratic system and the mullahs now realize this and have used domestic repression to quell the beliefs of the people.

Washington must continue escalating economic pressure on #Iran until regime dictator Ali @Khamenei_ir decides to reach for his own “poisoned chalice.”https://t.co/fLxtyNxWLz

In 1980, Ruhollah Khomeini began to interfere in Iraq by exporting clerics who preached his reactionary interpretation of Islam. This interference saw Iraq make the fatal mistake of attacking Iran.

To begin with, the People’s Mojahedin Organization of Iran (PMOI / MEK Iran) participated in defending the Iranian people from Iraqi aggression. This resulted in the loss of life of MEK supporters who were either killed or imprisoned throughout the war. By June 1982, the Iraqis had withdrawn from Iranian territory and proposed a ceasefire, rejected by Khomeini. Khomeini liked the war so he could end all opposition, but this did not work with the MEK, who persisted despite the loss of one million Iranians.

FACT: Khomeini's fatwa allowed children to be sent to war WITHOUT parents' consent.

In the Iran-Iraq war, thousands were snatched from school, given plastic keys to heaven & used in human waves to clear minefields.

If you're a parent, imagine your kid not returning from school. pic.twitter.com/Qj1XD6SrsG

Eventually, the regime had to accept the ceasefire with Iraq, because of the Iranian Resistance’s international campaign demanding peace. Iran was experiencing unrest so Khomeini ordered the massacre of at least 30,000 political prisoners, most of whom were MEK members.

The 9th Badr Brigade of the IRGC, which was initiated during the Iran-Iraq war, was made up of Iraqi war prisoners and those expelled from Iran. Two terrorists who were active in the 9th Badr Brigade were Iraqis. One was called Abu Mahdi Mohandes, who soon became Deputy Chief of the Popular Mobilization Force (PMF) of Iraq (Al Hashd-al Sha’bi). He was on the US terrorist list as well as the future commander of the IRGC Quds Force, Qassem Soleimani. Both these two men were killed on January 3rd, 2020, in an airstrike. A further terrorist was the IRGC Brigadier, General Hadi Ameri, who at one point served as a minister and member of parliament in the regime’s ‘’puppet governments in Iraq.’’

After being forced to accept ceasefire, Khomeini ordered execution of 30,000 #Iranian Resistance's members in prison #StopExecutionsInIran
This was an attempt to prevent a revolution for change & freedom https://t.co/JI69Y4cumc War with Iraq was planned as the regime's survival!

The NCRI wrote a description of the Quds force and stated it operated outside of Iran even though it returns when required such as the November 2019 protests, when it is brought in to suppress popular uprisings and launch attacks on the Iranian people. When the Syrian Civil War began in 2011, the Quds Force took part under Qassem Soleimani’s command, which supported the Bashar al-Assad dictatorship.

Khomeini was out to build his 'Islamic Empire' throwing away the trust of a nation that hoped for a trustworthy leadership #DisbandIRGC pic.twitter.com/tJ5GyIxaea

The NCRI states that big financial institutions in Iran, like Astan-e Quds Razavi, provide funding for the’’ terrorist operations of the Quds Forces and IRGC.’’

Examples of the regime’s warmongering

Who is paying the price?

The Iranian people have been paying the price of the regime’s warmongering because the ‘’ mullahs’ regime’’ has been using the national wealth causing widespread poverty to exist. The lack of funding for COVID-19 victims has caused unnecessary deaths as well.

Over 108,200 people have died of the novel #coronavirus in 440 cities checkered across all of #Iran’s 31 provinces, according to reports tallied by the Iranian opposition PMOI/MEK as of Wednesday afternoon local time, September 23.https://t.co/Pa2W5N08u2

The NCRI’s president-elect, Mrs. Maryam Rajavi, has said recently: “This regime must not be allowed to acquire even a single bullet. It must not pocket profits from a single barrel of Iranian oil. And it must not spend even a single dollar from revenues that belong to the Iranian people for its own survival.”