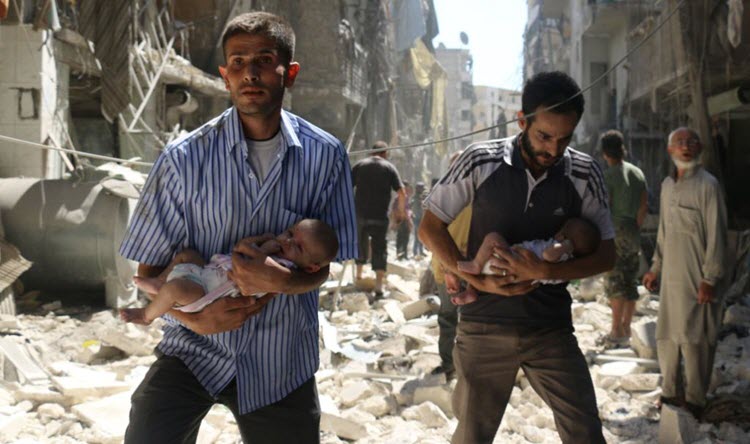 Maryam Rajavi, President-elect of the National Council of Resistance of Iran (NCRI) has called on the international community to act now to stop the Iranian regime from committing any more crimes against humanity in Aleppo, Syria.

She said that the innocent people in the besieged city of Aleppo are being subject to massacres that can only be described as war crimes and crimes against humanity and she praised them on their bravery.

Mrs. Rajavi said that the IRGC – the Iran’s Revolutionary Guards – and all the militias organised by the Iranian regime are responsible for crimes that should not be seen in this century and said that the international community’s silence is “totally unacceptable and shameful”.

Aleppo, she said, is the “eternal symbol of resistance” and called the people of the city an inspiration to all those who strive for freedom in Iran.

Mrs. Rajavi also commented on how the Iranian regime is at the centre of all crises in the region and must be evicted immediately.

Chairman of the Foreign Affairs Committee of the National Council of Resistance of Iran (NCRI), Mr. Mohammad Mohaddessin, also commented on the organisation’s stance regarding the continuation of bombing in Aleppo.

He acknowledged that the Iranian regime is responsible for the bombings which are killing so many innocent people in Syria. Mr. Mohaddessin described the events in Syria as “the biggest crime against humanity of the 21st century”.

He added that the silence and inaction by the international community is “despicable” and is a complete “shame for contemporary history”.

Mr. Mohaddessin reiterated the words of Mrs. Rajavi by saying that the Iranian regime and its IRCG are “the main source of crises in the region”. He too calls on the eviction of Iran from Syria.