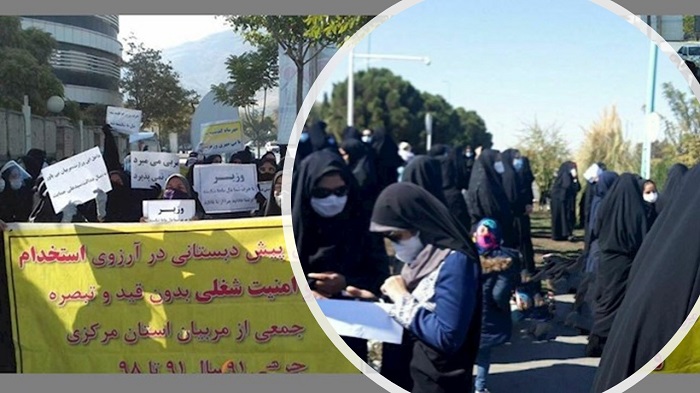 Protests sprung up across Iran last week, according to The National Council of Resistance of Iran’s (NCRI), and the People’s Mojahedin Organization of Iran (PMOI / MEK Iran), led by people all across the social strata who are furious over the regime’s mismanagement of the economy that has pushed them further into poverty.

Round up of Iran Protests: October 22-27

Various cities across #Iran witnessed protests by all walks of life, according to reports tallied by the People’s Mojahedin Organization of Iran (PMOI/#MEK), from October 22 to October 27. #IranProtests https://t.co/aRJVB9LMEQ

On Tuesday, October 27, MEK supporter from Dezfoul, report that kindergarten teachers held a protest outside the Education Department in central Dezfoul to demand unconditional employment.

While in Dezfoul, the Literacy Movement’s teachers held a rally to demand that their employment situation be clarified immediately.

On Saturday, MEK supporter from Yazd, report that female teachers in Yazd province, central Iran, protested over unpaid wages that have left them unable to buy bread – a basic foodstuff that increased dramatically in price this month, even though it was one of the few foods that Iranians under the poverty line could still afford.

female teachers in Yazd province protested over unpaid wages that have left them unable to buy bread – a basic foodstuff that increased dramatically in price this month, even though it was one of the few foods that Iranians under the poverty line could still afford. #MEK #Iran pic.twitter.com/vMT9JjFYpR

MEK supporter from Jahrom, report that contract workers from the Jahrom municipality in Fars province, eastern Iran, held a protest over having not received their paychecks for three months in a row.

Also, MEK supporter from Ardakan, reports that locals workers, in Yazd province, held a rally outside the office of their parliament member to protest the new steel units licenses being issued there.

MEK supporter from Chaharmahal and Bakhtiari Province, in southwest Iran, reports that over 1000 workers from the Barfab factory who were recently fired have held another protest gathering over their job and livelihood uncertainty.

Reports of new #IranProtests are escalating across #Iran.https://t.co/8WG3o97pRb

On Friday, MEK supporters from Kadkan reports that saffron growers in Kadkan city center have gathered to protest the steep decrease in the price of saffron flowers, having reached its lowest limit recently, as well as the regime’s failure to buy them at a reasonable price.

The National Council of Resistance of Iran (NCRI) wrote: “The ongoing protests in Iran show [that] the Iranian people consider the regime as the real source of all economic and social problems. These protests, simultaneous with the regime’s constant oppressive movements, are very important. They are in line and the continuation of the significant Iran protests in November 2019, which rattled the regime’s foundations.”

The regime is not able to address the people’s economic grievances, nor do they even wish to. This has put even more pressure on the Iranian people and the people’s reaction has terrified the regime officials.

Poverty is spreading across all of #Iran and millions of people are suffering from the regime’s destructive policies.#IranProtestshttps://t.co/NFSuWPJCDr

Mrs. Maryam Rajavi, the President-elect of the National Council of Resistance of Iran (NCRI), has said: ‘’All the promises by the mullahs to the deprived and calamity-stricken people of Iran are hollow and worthless. The only way to end poverty, destitution, and unemployment is to end the mullahs’ evil dictatorship and establish freedom and people’s sovereignty.’’