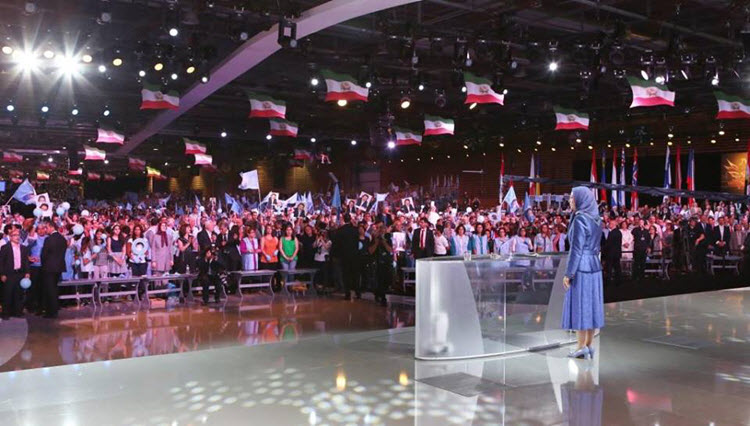 Raymond Tanter is a professor of political science at Georgetown University and is adjunct scholar at the Washington Institute in the United States. Tanter is considered an expert on Iran who in 2005 founded the Iran Policy Committee that promotes regime-change strategies in Iran.

His following comments were prepared in preparation for the large gathering in Paris on July 9 in support of freedom and democracy in Iran. Attending the rally will be parliamentarians, human and women’s rights activists, religious leaders from Islamic countries, the United

States and Europe and numerous senior politicians and tens of thousands of Iranians.

As a scholar studying the Mujahedeen-e-Khalq (MEK), the main resistance group that rejects clerical rule, and espouses a secular, democratic, and nonnuclear Iran, I have had the privilege of conducting a series of interviews in the annual rallies in Paris sponsored by supporters of the resistance.

Instead of being a routine commemoration, these rallies have taken on a huge political meaning. The outsized attention the Iranian regime gives to the rallies, how upset it gets because of the worldwide press coverage, efforts to block media coverage in Iran, and attacks by Tehran against the dissidents when the rallies occur are indicative of the political message: As the only movement that has not compromised with the Iranian regime’s assertion that radical clerics should rule, they consider the resistance as a threat to their survival. The rallies remind those who reign in Iran that regime change from within remains on the table.

2. In conducting interviews, I have been impressed with the geographical diversity of the attendees, professional qualifications, and steadfast commitment to achieve a secular, democratic, and nonnuclear Iran.

3. My research suggests that contrary to the rationale the West used to sell the nuclear deal with Iran, the regime has not started to act like a normal state that refrains from exporting the Iranian Revolution of 1979 abroad and using the Revolution to justify human rights violations at home. Unjustifiable public hangings of those who protest against the regime have increased, state-sponsored terrorism is on the rise, and there is little evidence of political moderation.

4. When the main Iranian resistance held a meeting in solidarity with the people of Syria during the spring of 2016, it sent a strong political message to Tehran and Damascus: The regimes of Bashar Assad andAli Khamenei will soon fall. Just as every war must end, so do regimes that lack legitimacy end up in the dustbin of history. It is no coincidence that Syrian and Iranian dissidents are in solidarity, and the meetings they hold together and in sequence are evidence of their solidarity. I expect the July 9, 2016 “Free Iran” gathering to reinforce the ties that bind the resistance movements of the Syrian and Iranian peoples.