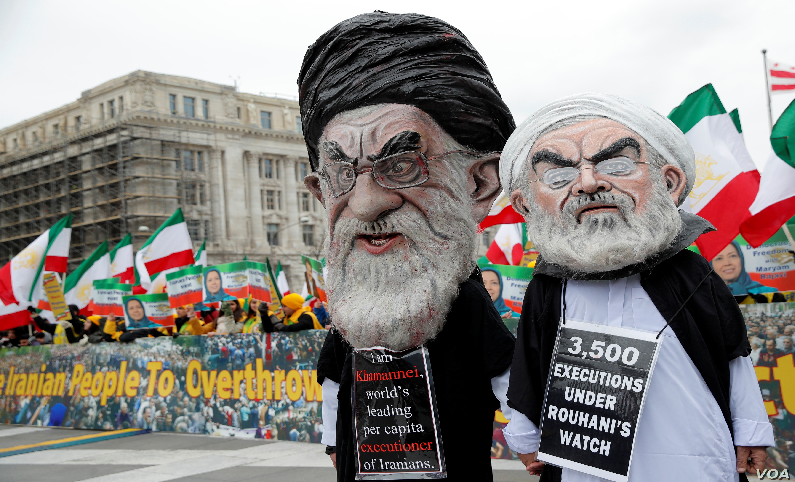 As Iran’s President Hassan Rouhani attended the annual gathering of world leaders in New York, the violation of human rights in Iran continued.
On Thursday, September 26, 2019, three prisoners were executed in Oroumiyah prison. According to Hrana News Agency, Thursday, 26 September 2019, Radif Azadi Khah, Shahabedin Mohamadpour from Oroumiyeh and Ebrahim Ahmadipour from Mahabad, who were prisoners of section 15 of Oroumiyah prison were executed.

The prisoners were sentenced on drug charges. However, the Iranian regime often uses drug charges to justify executions.

In other news, Wednesday morning, six other prisoners were executed in Rajai Shahr prison in Karaj.

Rouhani attended the United Nation General Assembly this week hoping to negotiate the lifting of U.S. Sanctions. Iran complains bitterly about the policies of U.S. President Donald Trump. Many western companies are not willing to do business with Iran and do not want to face potential U.S. secondary sanctions. This week Britain, France, and Germany officially blamed Tehran for the recent missile attack on Saudi Arabia.

While the world is looking for a solution for Iran, the Iranian opposition urged world leaders for recognition of the Iranian people’s right for regime change.

Supporters of a regime change in Iran rallied outside United Nations headquarters on the first day of the general debate at the U.N. General Assembly. The rally, in which several thousand people took part, was organized by the Organization of Iranian American Communities (OIAC).
Prominent American politicians spoke at the rally. Trump’s personal lawyer and former New York Mayor Rudy Giuliani addressed the crowd, describing Iran’s Supreme Leader Ali Khamenei as “the murdering ayatollah” and Tehran’s clerical leadership “the murdering mullahs.”

“I am speaking in my individual capacity. I am for regime change. Down with the tyrants in Iran. Down with the ayatollah and the mullahs and all the crooks,” said Giuliani.

Mrs. Maryam Rajavi the president-elect of the National Council of Resistance of Iran (NCRI), sent a video message to the demonstration by Iranian Americans, supporters of MEK and NCRI.

Mrs. Rajavi acknowledged that following the attack against Saudi Arabia’s oil facilities, the real question the international community is facing is how to “advance a policy of complete decisiveness and firmness against this regime.”

“The most crucial solution to discard religious fascism is to overthrow it. Overthrow at the hands of the people of Iran and their organized resistance,” said Mrs. Rajavi.

Mrs. Rajavi stated:
• “The UN Security Council must declare the clerical regime a threat to global peace and security. And, the dossier of the regime’s human rights violations, particularly the massacre of 30,000 political prisoners in 1988, mainly MEK members, must be referred to an international tribunal.”

• “Ousting the clerical regime from the rest of the region and expelling the IRGC and proxy militias from Iraq, Syria, Yemen, Lebanon, and Afghanistan is an urgent imperative.”

• “We urge all countries to join the international front against the religious fascism.”

• “The international community must recognize the right of the Iranian people’s Resistance to overthrow religious fascism and achieve freedom.”