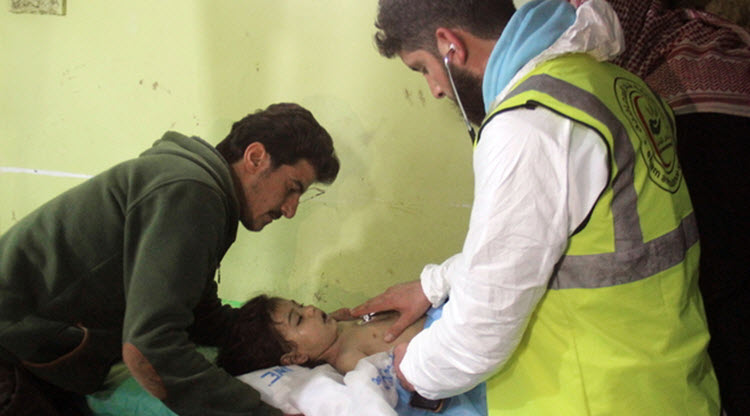 The gas attack in Khan Sheikhoun, Idlib Province, on Tuesday was strongly condemned by European Iraqi Freedom Association (EIFA) and their President Struan Stevenson, former MP representing the Delegation for Relations with Iraq (2009-14) and Chairman of Friends of a Free Iran Intergroup (2004-14).  They also call for urgent and effective action by the UN Security Council to punish Bashar al-Assad.

They call the attack a war crime, that left hundreds of people dead and injured, and say that silence from the international community, and their inaction in response to this massacre will embolden the Syrian dictator and his allies, who will continue to expand, and even escalate such war crimes, as well as crimes against humanity.

Tens of thousands of Syrians have been slaughtered with bombs, bullets, and poison gas.

In Eastern Ghouta in 2013, a similar attack took place, and afterwards the international community made no reponse, despite then-President of the United States, Barack Obama, having said, “My preference would have been that the international community already would have acted,” he said citing “the inability of the Security Council to move in the face of a clear violation of international norms.” He also expressed frustration with the lack of international support, saying that, “a lot of people think something should be done, but nobody seems willing to do it.”  Failure to act led to 4 more years of ongoing atrocities in Syria.

The head of the Syrian Civil Defence (or White Helmets), Raed Al Saleh, has said, “I am horrified at reports that certain leading European politicians want to consider a deal with the Assad regime. It is beyond belief that the perpetrators of most of the violence could effectively be rewarded and even propped up, for their brutal crimes.”

In an article published by the EIFA, they say, “It is important to point out that war crimes in Syria have taken place with the full cognizance and support of the Iranian regime and the active presence and involvement of Iran’s Islamic Revolutionary Guard Corps (IRGC) and its affiliated militias. Therefore the UN, US and EU must combine their political will and use all their resources to expel the Iranian regime’s forces and militias from Syria as the first essential step for toppling Assad and establishing peace and democracy in Syria.”

Condolences to the families of the victims of this horrific attack.