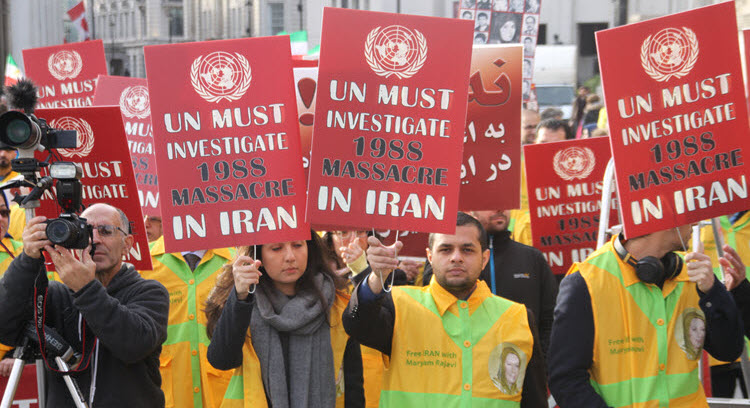 A huge demonstration against the human rights abuses of the Iranian Regime took place in Trafalgar Square on Saturday, November 19.

The protesters, which included Anglo-Iranian communities, supporters of National Council of Resistance of Iran (NCRI) and human rights activists, highlighted the staggering number of executions that have happened so far in 2016.

Maryam Rajavi, the NCRI president-elect, wrote a speech for the demonstrators which was read out by Andrew Mackinley, a former member of the Foreign Affairs Committee in the UK Parliament.

It read: “Your gathering is taking place at a time when a wave of protests by our countrymen has escalated in Tehran and other cities across the country … To contain the protests, [the ruling mullahs] have stepped up the executions.”

It continued: “After the nuclear agreement, while the mullahs’ human rights abuses in Iran and their genocide in the region have intensified, Western governments and companies must not expand their trade relations with the Iranian regime. … Doing business with the clerical regime in Iran gives an open hand to the mullahs in the suppression of the people of Iran, and in the export of war and carnage to Iraq, Syria and Yemen.”

The demonstrators also used street performance to draw attention to the 1988 massacre of political prisoners in Iran. During the latter months of 1988, activists of the People’s Mojahedin Organization of Iran (MEK), were executed and buried secretly in mass graves on the orders of Supreme Leader Ayatollah Khomeini.

There are currently 60 high-ranking members of the Iranian Regime, who were involved in the massacre. They have not been punished for their crimes, which is why the international community should come together to condemn them and call for a UN investigation into the crimes.

Hossein Abedini, from the NCRI Foreign Affairs Committee, said: “The Iranian regime’s leaders, high-ranking officials, and incumbent judiciary officials are the main masterminds and perpetrators of human rights violations in Iran, particularly in the case of the 1988 massacre, the United Nations needs to launch an independent investigation committee to probe these violations and bring the perpetrators to justice.”

The Iranian Regime is not supported by the people of Iran; they have to use violence and repression to keep their positions of power.

The protesters urged the British government to condemn the 1988 massacre as a crime against humanity and pressure the UN to launch an independent inquiry. They also want to ensure that relations with Iran are subject to an improvement in human rights. They put these demands into a letter for Prime Minister Theresa May.

He said: “Your calls to the government today to act to stop the ongoing atrocities in Iran and bring the perpetrators of the 1988 massacre prosecution to justice have a strong support among many members of both Houses of parliament from all parties.”