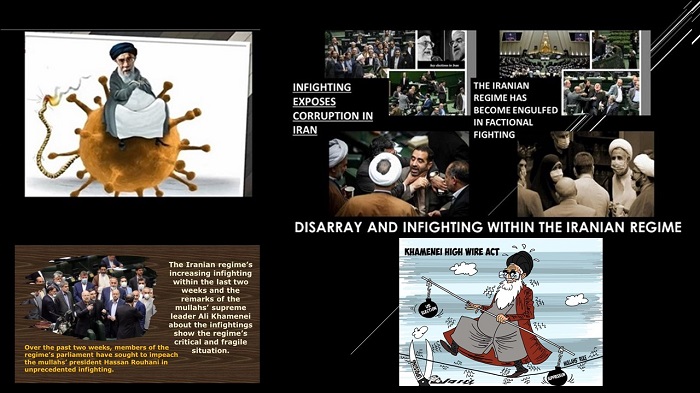 Infighting within the Iranian regime has reached unprecedented levels, with the Supreme Leader, Ali Khamenei’s personal position considerably weakened by his inability to control criticism of the president, Hassan Rouhani. Some political commentators have compared the shambles in the regime to the last days of the Shah’s hold on power before he was ousted in the Iranian Revolution of 1979.

1,500 were shot dead or died of untreated injuries because they wanted #IranRegimeChange🟫
Protesters told Khamenei to back down, and that neither he or the kind of Shah is accepted🟡
Democracy rules our land🟧https://t.co/w3Mtn3AXFy

The infighting currently consuming the regime has been compounded by the regime’s own incompetence in managing both the economy and the pandemic and the utter fear that many officials have of being thrown out of office by rising discontent within the country.

Hassan Rouhani is facing a serious threat of impeachment by members of the parliament. Even some of Khamenei’s own faction is seeking his impeachment. The situation has become so chaotic that the head of parliament’s National Security and Foreign Policy, Mojtaba Zolnouri, has even called for Rouhani to be executed.

Infighting by regime officials over the major failures. The visible arguments, which are occurring in parliamentary sessions, demonstrate the weakened state of the regime, after mounting pressure and corruption has created conflict and division. #MEK #Iran #FreeIran2020 pic.twitter.com/fKZTKNiFfg

Khamenei has attempted to stem the criticism of Rouhani. In an unprecedented move, his own absence from parliament came to an end as he obviously thought he had to attend in person to try and sort out the mess that was taking place. Khamenei stated that any attempt at impeaching Rouhani would embolden those of the public who opposed the regime and increase the chance of another uprising.

The chaos in the parliament is a sign of the critical and fragile situation that the regime is facing. The chaos is not just a sign that there are serious differences of opinion between rival factions but it has more to do with the inability of the regime to stop the slide into oblivion as its overthrow becomes more certain.

#Iran: The infighting by the #Iranian regime’s rival factions has reached new heights. These infightings indicate the regime’s and society’s critical situation.#NoImpunity4Mullahs https://t.co/aXQ8i6ux3u

Part of the reason for the infighting in the regime has also been caused by the failure of brutal repressive tactics to suppress the protests and the growing influence of the People’s Mojahedin Organization of Iran (PMOI / MEK Iran), a network inside Iran called MEK Resistance Units.

Iranians blame the government for its incompetence at managing the economy, their rising poverty levels, and the failure to deal with the pandemic, according to up-to-date figures reported by the (PMOI / MEK Iran), has seen over 138,300 people die from the disease.

Member of Iranian Parliament from Kermanshah admitted that the regime had given at least 20 to 30 billion dollars #Iranian Money to the #Syrian regime of dictator Assad to help prop it up during the civil war in that country. https://t.co/LF0BsEkF6N#Iran #MEK @USAdarFarsi pic.twitter.com/t9wgF3jtB7

There have been at least three popular uprisings in the last 3 years. The most common slogans heard at these protests have been ‘Death to Khamenei’ and ‘Death to the Principle of Velayat-e Faqih (Supreme Clerical Rule).’ Iran has turned into a political powder keg and the chaos in the parliament is a symptom of this.

After eight months of absence, Khamenei met with the National Covid-19 Task Force, the meeting, according to the Iranian Resistance, The National Council of Resistance of Iran’s (NCRI), and (PMOI / MEK Iran) was less about the pandemic than preventing uprisings, given the participants, including:

Khamenei showed up personally to address the regime’s crises. But his remarks portrayed the regime’s absolute deadlock. He could neither quell his regime’s infightings entirely nor offer any a specific solution for the COVID-19 and economic crises.