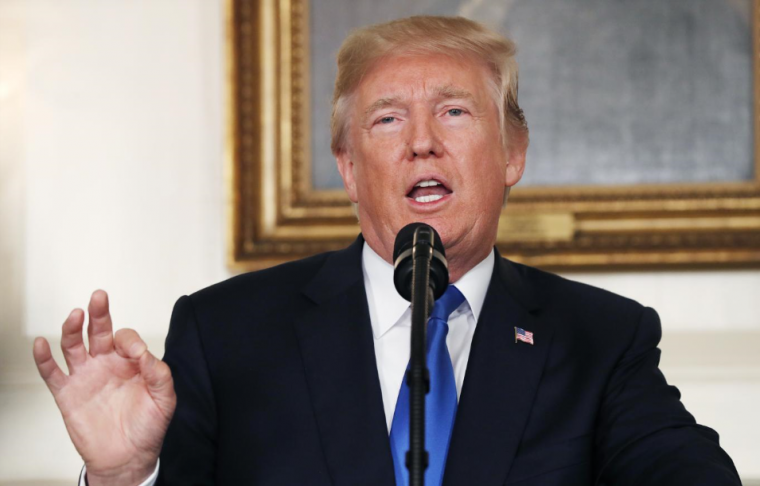 by Staff writer, SF
When US President Donald Trump announced last month that he was pulling out of the 2015 nuclear deal, he received criticism from many officials and leaders around the world. Before his decision was announced, European leaders made a desperate bid to convince him to remain in the deal.

However, he went against the advice from the Europeans and in his announcement speech he made his reasons for doing so very clear.
He cited Iran’s belligerence in the Middle East, its spread of terror, its mistreatment of its own people, the Iranian regime’s corruption, the mismanagement of the country’s resources, and so on. And most pertinently, he said that the 2015 nuclear deal does not curb the Iran threat at all.
Trump’s reasons were concise. So why is he still being accused of isolating the United States from the rest of the world and especially its allies in the West? Trump is also being accused of endangering US diplomacy and worsening the risk of a regional war in the Middle East.
However, those making such arguments have clearly not listened to Trump’s reasons for pulling the United States out of the nuclear deal. Trump has spoken extensively about this thoughts on Iran, the nuclear deal and the Iranian regime’s regional belligerence. He has identified the regime as a major threat to peace, security and stability in the region and is taking action to lessen the threat. He is deciding to take the opposite approach to his predecessor Barack Obama.
Obama’s policy of appeasement towards Iran did not work. In fact, it was worse than ineffective because it emboldened the Iranian regime. Trump has made the bold choice to stray away from the overwhelming majority of leaders that wish to brush the Iran threat under the carpet.
Following Trump’s decision to leave the deal, his Secretary of State Mike Pompeo also expressed his steadfast attempt to curb the Iran threat. He too emphasised that the Iran nuclear deal, instead of being the key to peace like so many claim, has become a way for the number one state sponsor of terrorism to continue its belligerence.
He even gave Iran two option. It could give the Iranian economy a chance to recover or it could continue to fund terrorism and its exploits abroad. Pompeo made it clear that the United States will not allow it to do both.
Furthermore, the Trump administration has spoken about the people of Iran – the first victims of the Iranian regime. Despite the main opposition’s best efforts, the National Council of Resistance of Iran (NCRI) has been so far unable to get the majority of world leaders to focus some of their attention on the people who systematically have their human rights trampled by the suppressive regime.
At the end of the month, on 30th June, the NCRI will no doubt once again concentrate much of its efforts on the Iranian people. Traditionally, at its annual rally, dignitaries, human rights activists, lawmakers and politicians gather to advance the movement towards a free and democratic Iran.