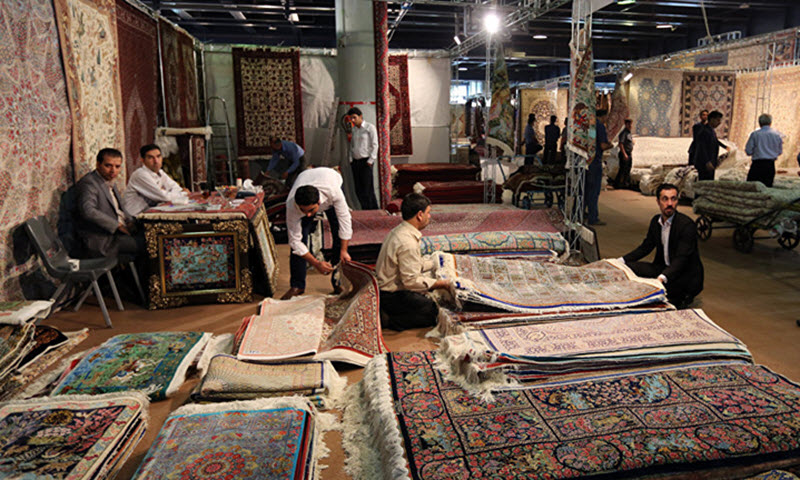 Persian carpets, also known as Iranian carpets, are a heavy textile, made for a wide va-riety of utilitarian and symbolic purpose, produced in Iran (historically known as Per-sia), for home use, local sale, and export. Carpet weaving is an essential part of Persian culture and Iranian art. Within the group of Oriental rugs produced by the countries of the so-called “rug belt”, the Persian carpet stands out by the variety and elaborate-ness of its manifold designs. Persian carpets and rugs of various types were woven in parallel by nomadic tribes, in village and town workshops, and by royal court manu-factories alike. As such, they represent different, simultaneous lines of tradition, and reflect the history of Iran and its various peoples.

Thirty-five percent of Iran’s carpet exports, equivalent to $120 million a year, go to the US. However, now that exports to the United States have been halted by the re-imposition of the second round of US sanctions earlier this month, Iran’s carpet sec-tor suffered heavy losses, according to the Association of Iranian Rug Dealers.

State-owned ISNA news quoted Abdollah Bahrami, the head of the National Union of Cooperatives of Iran’s Carpet Manufacturer as saying, “Iran has lost a fertile market after sanctions have been enforced.” Bahrami stated, “We are now seeing a decline in carpet exports, and called on the government to provide financial support to encour-age new markets to receive Iranian carpets. Exporters are focusing on emerging mar-kets such as Russia, China and southern Africa, claimed Bahrami. He also discussed the possibility of circumventing the sanctions and exporting carpets to US markets. But, after export to a third country, and in the names of their competitors, Iranian carpet makers would lose their high quality reputation.

The sanctions on exporting the carpets have affected six million Iranians.

If the US market is the most important destination for Iranian carpets, then Razi Haji Aghamiri, Head of Tehran’s Chamber of Commerce’s Exports Committee said he be-lieves that his country “has lost the market forever.”

In fact, ILNA quoted Aghamiri as saying that the Iranian carpet had lost its value after diplomatic ties between Iran and the US were severed in 1979, and the sanctions were imposed on Tehran.m “Some traders have tried to smuggle Iranian carpets into the United States through Canada and Mexico, but it seems that Trump’s administration is more aggressive than that of Obama and has closed this route,” he said.

“Iran is losing its markets to Pakistan and India,” Aghamiri stressed.