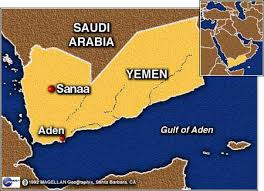 The Economist reports that when citizens in Arab countries in the Persian Gulf woke up to a Saudi military operation in Yemen on Thursday, “many had the same thought: it’s about time.”

The Arab people have seen war break out again and again, and it is sad to see another country fall to ethnic conflict. Additionally, Iranian regime aggression has not let Iran make any friends in the Persian Gulf.

Saudi Arabia has long kept itself out of the war zone. Even with Iraq falling to ISIS and militias controlled by the Iranian regime it has remained above the fray.

Yemen is a hub for maritime passage for trade. The Arab countries in the Persian Gulf and Egypt and Turkey do not want a disruption in trade. Egypt has even sent forces to the straits to make sure the passage does not close.

With the Arab states coming together, and Saudi air strikes in Yemen, the odds are stacked against the Iranian regime. The operation has been called “Decisive Storm” and has promised to use the military backing of over a dozen countries to push back the Tehran-allied Houthi rebels. Nearly every country in the neighbourhood is participating, including Sudan.

For months, the states of the Gulf Co-operation Council (GCC) had watched with consternation as Iranian-backed groups in Syria, Iraq and then Yemen had been gaining ground.

“From a Gulf citizen’s perspective, you’re just seeing Iran taking everything in the region,” said Omar Mahmoud Mohamed, a research analyst at Bahrain Centre for Strategic International and Energy Studies. “Now, finally, we are doing something to try and shape events in our favour.”

“There’s a lot of messages in this,” said Abdulkhaleq Abdulla, an Emirati political scientist. “It shows the kind of confidence that the GCC and Saudis feel. Is it a message to Iran? Of course it is.”

Saudi Arabia has complained to Washington for months that an unsanctioned Iran could be more emboldened to meddle in the region.

The Iranian opposition, the National Council of Resistance of Iran (NCRI) had also been raising alerts.

Now it is clear that Riyadh, which gave less than an hour’s notice to US Central Command before starting air operations, will use its power to try to contain the Iranian regime’s threat in the region.

And what else could be expected? Any state would go to the regional powerbroker, to ensure its sovereignty and territorial integrity.