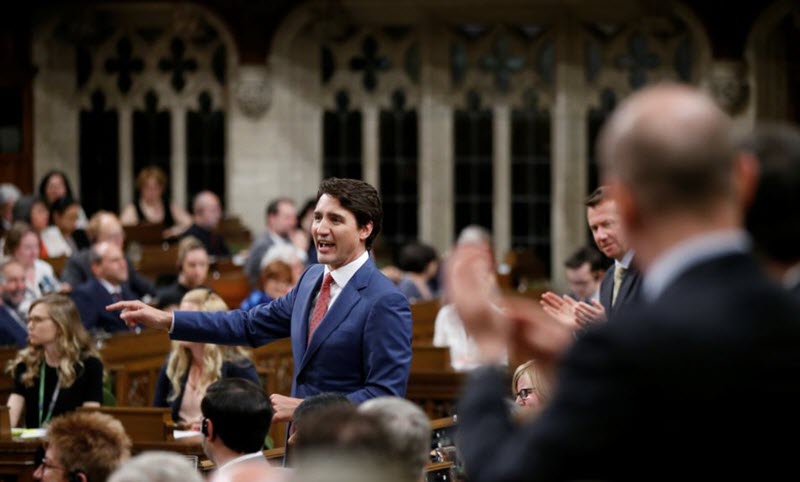 by Saeed
Canadian Prime Minister Justin Trudeau changed his tune on re-establishing diplomatic relations with the Iranian Regime on Tuesday, when he and the rest of the Liberal cabinet voted in favour of a Conservative motion to condemn the Regime.

The motion, proposed by Conservative MP Garnett Genuis, called for the government to stop any attempts to restore relations with Iran, the release of Canadians held hostage in Iran, and the Islamic Revolutionary Guard Corps (IRGC) to be designated a terrorist entity.
Trudeau had campaigned on the promise of re-establishing relations that were cut off in 2012 under the previous administration, but has faced serious opposition from Conservatives and more importantly Iranian dissidents.
It seems that the Liberals have realised that the Iranian Regime cannot be dealt with through diplomatic means, which is important as the Regime only responds to firmness.
Why the change of heart?
There are many reasons why Trudeau may have changed his mind on the issue, from Donald Trump’s decision to pull the US out of the nuclear deal and reimpose sanctions to the Iranian people’s ongoing call for regime change.
However, some have said that Trudeau made his decision because of Iran’s illegal detention of Canadian-Iranian citizen Maryam Mombeini, who tried to leave Iran with her adult children after her husband died under suspicious circumstances in prison, where he was a prisoner-of-conscience.
Whatever Trudeau’s reasons, he has made the right decision. The Iranian people deserve freedom, something they are denied under the Regime, and Canada should not negotiate with the mullahs as if they are of the same standing.
The Iranian people are calling for regime change and risking their lives by doing so, as criticising the Regime can carry the death penalty. They’ve supported strong moves to condemn the Regime by foreign powers, including Trump’s withdrawal from the flawed nuclear deal, which benefitted the IRGC and not the Iranian people.
The Iranian people deserve the support of the international community and one way for Trudeau to show his support would be to send a delegation to the Free Iran Gathering in Paris on June 30.
Terrorist Designation
By listing the IRGC as a terrorist organisation, Canada would be going further than any other country in the world.
Public Safety Canada has suggested that this move may not go ahead, but it definitely should. The IRGC is responsible for much of Iran’s terrorist activity, by funding and arming terrorist groups. They even run a terrorist training camp in Iran for militants from across the Middle East.