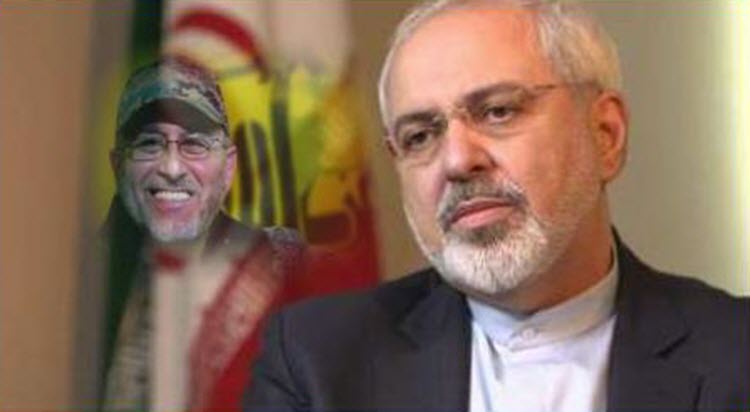 The National Council of Resistance of Iran (NCRI) has reported that the Iranian regime’s foreign minister, Javad Zarif, has praised a Hezbollah top military commander in Syria following his death in Damascus this week after an explosion.

In a message to the Hezbollah leader, Hassan Nasrallah, he said: “I express my condolences on the martyrdom of the great holy fighter Mustafa Badreddine who was full of spirit and heroism in defending the righteous values of Islam and the combatant people of Lebanon.” The Iranian regime’s state media, including the official news agency IRNA, reported his remarks.

On Saturday, Firouz Mahvi of the Foreign Affairs Committee of the NCRI, commenting on Zarif’s praise for the Hezbollah terror chief, said: “Heaping such praise on a notorious international terrorist clearly shows the true nature of the mullahs’ foreign minister Javad Zarif so far as it pertains to his belief in terrorism as a state tool. This is in tandem with Zarif’s previous acts such as laying a wreath at the grave of Imad Mughniyah, the former military commander and head of the terror apparatus of Hezbollah, in 2014. This once again manifests a simple reality that the so-called ‘moderate’ official of the clerical regime is simply a smiling terror master.”

The death of Badreddine is the biggest blow to Hezbollah since the death of his brother-in-law, Imad Mugniyah, in 2008. Mugniyah was behind the bombing of the American Marine barracks in Beirut that killed 241 people in 1983, as well as numerous other acts of violence.

Chairman of the Foreign Affairs Committee of the NCRI, Mohammad Mohaddessin, in his book “Islamic Fundamentalism: The New Global Threat” (published in 1993) included a clipping taken from Ressalat, an Iranian state-run newspaper. This clipping from 20th July 1987 had a quote from the then Minister of the Revolutionary Guards (IRGC), Mohsen Rafiqdoost. It said: “Both the TNT and the ideology which in one blast sent to hell 400 officers, NCOs, and soldiers at the Marine Headquarters have been provided by Iran.”

The NCRI state that “Badreddine and Mugniyah were among the early recruits for Hezbollah which was fostered by the Iranian regime’s Revolutionary Guards in Lebanon”. They also draw attention to the fact that “Badreddine was indicted by the United Nations-backed Special Tribunal for Lebanon in the 2005 killing of former Lebanese Prime Minister Rafik al-Hariri”.