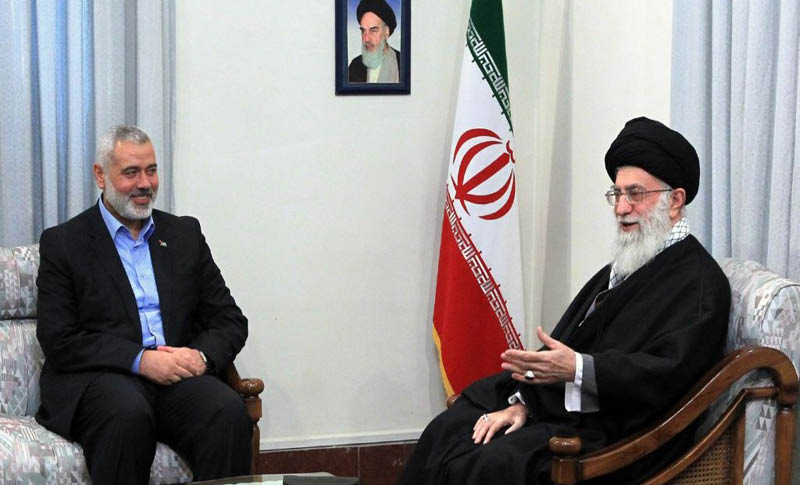 The leader of the Palestinian terror group Hamas has written a letter to the Supreme Leader of the Islamic Republic Ali Khamenei to thank him for “the excellent reception” he offered to a Hamas delegation visiting Iran and, further, for his “extensive” support to the group.

khamenei’s official website reported that Ismail Haniyah had, in the letter, expressed “his utter joy” for “Iran’s readiness to equip the resistance for whatever it needs to discharge its duty”. He also added that he “thanked God for the Supreme Leader’s presence.

For reference, Iran and its malign allies in the Middle East region use the term “resistance” to mean any and all anti- Israeli, anti-US forces, and anti-Western forces and activities.

The Palestinian delegation, Salih al-Arouri, led by the deputy chairman of the political office of Hamas visited Tehran in July and met with Khamenei.

Two weeks later, reports surface in international media, quoting unnamed Iranian government sources, that said Iran increased its aide to Hamas to $360 million per year, up from the usual $100 million.

Iran’s ongoing material and moral support for terrorist groups, like Hamas and the Lebanese Hezbollah, is one of the major reasons that Donald Trump launched his “maximum pressure” campaign on the Regime’s economy and diplomacy.

Last year, he pulled the US out of the 2015 nuclear accord, which provided sanctions relief in exchange for a supposed reduction in Iran’s nuclear activities. Trump said that Iran was non-compliant with the deal and that the deal failed to address things like Iran’s ballistic missile program and its support for terrorism. Trump then issued economic and diplomatic sanctions on Iran and its leaders, believing that this will cause a change of behaviour by the Islamic Republic.

While a tough approach to Iran is the only right one, it is wrong to believe that the Regime will change its behaviour. The Regime has proved incapable of reform over the past 40 years and the only way to ensure democracy in Iran is to support the Iranian people and the National Council of Resistance of Iran (NCRI) who are fighting for freedom and democracy in Iran.