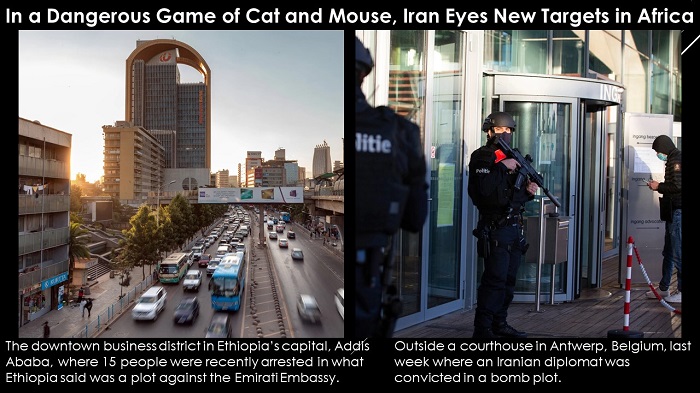 The Ethiopian intelligence agency announced recently that it had uncovered a 15-person cell that it said was casing the United Arab Emirates embassy with weapons and explosives with the intention of carrying out a major attack that would have been damaging to Addis Ababa.

This is all very frightening, but this announcement leaves out an important detail: the culprit. The clue is the 16th person arrested, Ahmed Ismail, who is said to be the ringleader and was arrested in Sweden thanks to a multinational intelligence operation.

So, who is responsible? American and Israeli officials are blaming Iran, saying that the regime activated a sleeper cell in Ethiopia’s capital last autumn to gather intelligence on the United States and Israeli embassies.

The director of intelligence at the Pentagon’s Africa Command, Rear Adm. Heidi K. Berg, said that Iran was the “mastermind of this foiled plot”.

They say that the goal was to find soft targets in Africa to avenge Iran’s recent high-profile losses, like top nuclear scientist Mohsen Fakhrizadeh, reportedly killed by Israel, and Quds Force commander Qasem Soleimani, who was killed in a US drone strike.

A senior US military official linked these arrested to a failed plot to kill the American ambassador to South Africa last year.

But why would Iran target the UAE? Well, the country recently normalized relations with Israel, and the Ethiopian embassy probably seemed like an easy target, with the host nation distracted by the ongoing war there, according to former CIA officer Bruce Riedel.

These arrests come at a time when there is increased tension between the US and Iran, as Biden continues to keep his cards close to his chest about their relationship. Although, he has stated that he will not re-join the nuclear deal unless Iran starts abiding by it and hinted that there may need to be additional agreements to deal with Iran’s other malign behavior, especially after the Iranian intelligence minister made veiled threats about nuclear weapons.

Farzin Nadimi, a specialist on Iran’s armed forces with the Washington Institute for Near East Policy, said Iran might want to send a message to the Biden administration that “unless they reach a deal with Iran quickly this is what they get: a dangerous neighborhood”.

Ethiopia’s National Intelligence and Security Service also spoke about a plan by another group to attack the UAE Embassy in Sudan, as confirmed by a Sudanese official.

On February 4, an Iranian diplomat was found guilty of terrorism at a court in Belgian, for having organized a thwarted bomb attack aimed at an Iranian opposition, The National Council of Resistance of Iran (NCRI), and the People’s Mujahedin of Iran (PMOI / MEK Iran), rally in France in 2018. With prosecutors saying the order for the failed bomb plot came from the highest ranks of the regime.