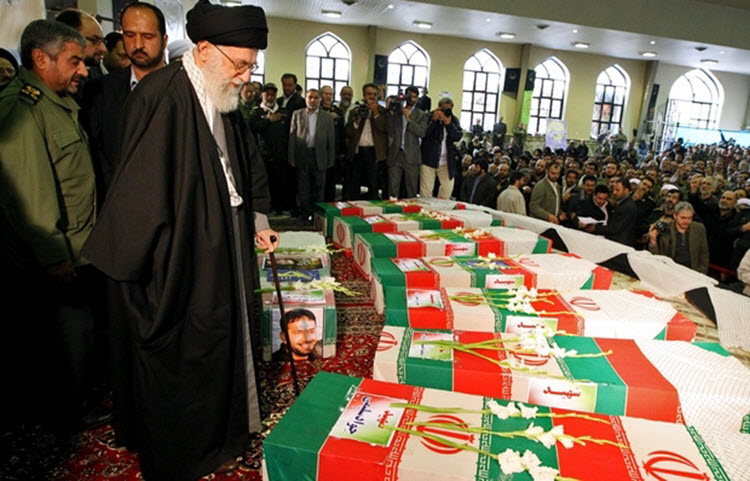 IRGC brigadier Mohmmad Ali Jaafari, head of the IRGC, gave a speech during a ceremony for the IRGC members that have been killed in Syria. He once again insisted that the dispatch of a large number of forces to Syria is necessary. He said that killing the defenceless people of Syria is “defending the sanctity of the leader and revolution”. He also said that the “armed struggle of the Islamic revolution beyond Iran’s borders is a very big and divine blessing that not everyone will have”.

In reference to the latest battalions of mercenaries that have been stablished for dispatch to Syria he said: “A good foundation was set up in Tehran … to expand this front, and we are expanding it across the country.”

Ghalibaf, the regime’s mayor in Tehran and a member of Khamenei’s inner circle, said: “Less than a decade ago, there were some people on Tehran streets chanting ‘No to Gaza, no to Lebanon, my life is for Iran’ … Even at that time the media were implying why should our money be spent somewhere else? Why our children are fighting in another front?’” According to Tasnim (a news agency of the terrorist Quds force), he described the war in Syria as more difficult than the Iraq war.

The head of Majlis, Ali Larijani, said that because of its love of Ahl-e Beit (basically, export of terrorism), Iran has created a magnificent movement in which they have security and power.

Nategh Nouri, the head of Khamenei’s special inspection bureau, also admitted to popular protests against the regime’s meddling in Syria. Nouri said: “Lebanon, Syria and Palestine are our embankments. When we give consultation and martyrs in Syria, it is for the enemy to not enter our borders. Some people say why you are giving the country’s assets to Syria, Lebanon and Palestine.”

The National Council of Resistance of Iran (NCRI) pointed out that in internal reports the IRGC commanders are worried about the length if the war in Syria and fear that after the US elections the situation will turn against them. Thus, they need to “attain a better military situation and to stabilize Bashar Assad”.

The NCRI say that the regime is heading towards an impasse in Syria. A huge number of forces have been sent to Syria and Iran has spent billions of dollars belonging to the deprived Iranians. A large number of IRGC commanders have been killed and “there is no prospect for the regime to get out of Syria’s crisis”.