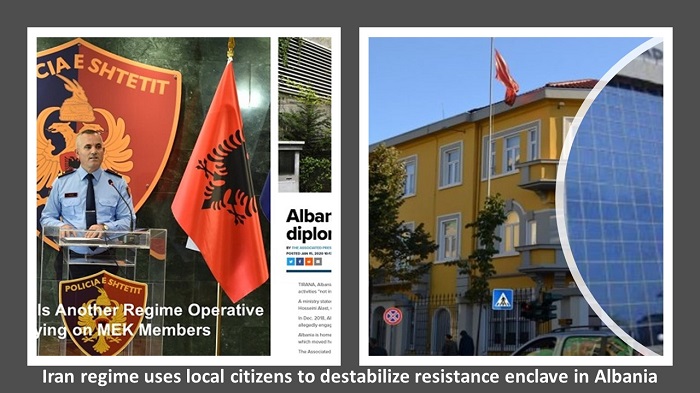 The main opposition movement against the clerical regime settled in Albania in 2016, after being harassed and attacked by Iran-backed militia in Iraq during several years since the 2003 war in Iraq, where they were formerly settled.

“Another Iranian individual has been designated by Albanian authorities as persona non grata (unwelcomed element) for his actions against the Iranian opposition People’s Mojahedin Organization of Iran (PMOI/MEK) in Albania.”#Iranhttps://t.co/SrAegv3t8B

The movement has since received necessary support not only from Albanian politicians inside and outside the government but by outstanding figures such as the late US senator John McCain, former New York City mayor Rudy Giuliani, several former ministers in European countries as well as scores of parliament members across the world.

Hundreds of dignitaries around the world attended an important meeting organized by the movement last year in their base settlement code-named Ashraf3, near the Albanian port of Durres, in July 2019.

This year, the coronavirus pandemic did not stop the movement from organizing their annual meeting, this time online, in a technical marvel relating more than 30.000 points together across more than 100 countries during a 3-day event.

According to the website Iran probe, a certain Olsi Jazexhi, claiming to be Albanian, tried to harass one Ashraf3 resident by taking part in an officially organized scenario by Tehran.

Jazexhi tried to make Iran-based relatives of opposition members call them from Iran, where security authorities strictly control telephone communications, to warn them on opposing the regime, according to the website.

Jazexhi pushed the brother of one of the residents to call him from Khuzestan province in Iran, to “insult and make criminal accusations” against him, according to Gholamali Narimi, who disclosed the affair to Iran probe.

“The location of this interview was not just incidental,” says Narimi.

“Khuzestan was the epicenter of the November 2019 uprising against the Iranian regime. This nationwide uprising engulfed Iran and brought the regime to the brink of overthrow. Tehran later admitted that the MEK played the key role in that uprising as well as an earlier one that began in December 2017,” he further elaborated.

Iranian armed forces brutally suppressed the November uprising by firing into crowds and killing 1,500 peaceful protesters across the country in just three days. One of the most horrifying mass killings happened in the city of Mahshahr, in which heavy machine-gun fire on the part of the Revolutionary Guards Corps killed scores of Arab countrymen.

The New York Times wrote that Revolutionary Guard members surrounded, shot, and killed 40 to 100 demonstrators — principally unarmed younger males — in a marsh where they had sought refuge. Local reports indicated that over three days of unrest, the city’s death toll reached 130.

The attempt by Jazexhi aims to enforce the Iranian regime’s claims that Ashraf3 residents were not allowed to contact family members.

“This is another lie. A few months ago, I had a telephone call with my family,” says Mr. Narimi. “I later found out that the call had been under surveillance by Iranian intelligence agents.”

Mr. Narimi sees the effort as part of Tehran’s tactics, which, inside the country, forces opponents to participate in forced television interviews to condemn the opposition, and outside the country, intimidates dissidents through pressuring their relatives inside Iran.

#Albania said on Wednesday that it had expelled two #Iranian diplomats from the countryhttps://t.co/hRrHksyEud#Iran #IranProtests #MEK @USAdarFarsi pic.twitter.com/bXVI8N3chn