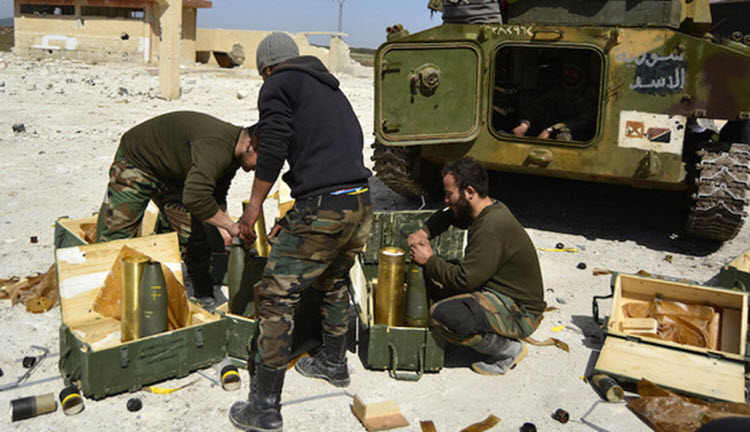 On the front lines of Syria’s six-year war are thousands of Afghan Shi’a sent by Iran to fight against armed rebels. Some of them are poorly trained, made up of mainly Afghan migrants and refugees known as the Fatemiyoun Division. Observers say that they have suffered a high rate of attrition, and coffins of fallen soldiers are paraded and buried in Iranian cities almost every week.

Tehran is luring new recruits to Fatemiyoun, by state media have glorified fallen fighters and highlighted their sacrifices by calling them to martyrs and renaming streets in their honor. The group, comprised mainly of Afghan refugees from the Hazara Shi’ite minority who are recruited and trained by Iran’s powerful Islamic Revolutionary Guards Corps (IRGC), is frequently visited by General Qassem Soleimani, the influential head of the IRGC’s elite Quds Force.  In fact, in June, footage aired by Qatar-based television network Al-Jazeera showed Soleimani praying and addressing the Afghan fighters near the Syria-Iraq border.

Iran’s state media reported recently that the Lebanese militant group Hizballah is training Afghan “special forces” in sniper skills, night-vision mounted weapons, and surveillance. The IRGC published photos of the training in June. Hundreds of trainees are said to have been deployed across Syria.

Ali Alfoneh, a nonresident senior fellow at The Atlantic Council in Washington and a leading IRGC expert, told RFE/RL, “In reality, there is absolutely no hard evidence of [the] existence of such skills among the Fatemiyoun fighters, this is a myth carefully nurtured by the IRGC to boost the prestige of the brigade.”

Track Persia, a Platform run by dedicated analysts who spend much of their time researching the Middle East, said in their article that, “Iranian authorities quietly began deploying armed volunteers, including many Afghans, to complement other Iranian forces advising and fighting alongside Assad’s troops after civil war broke out in Syria in 2011.”

Iran has recruited thousands of Afghan migrants and refugees within its own borders. Estimates by the United Nations put the number of Afghan citizens in Iran at just under 1,000,000, but Tehran puts the figure closer to 3,000,000. Tehran expels many Afghans, and periodically threatens those who remain with mass expulsions. Some reports suggest Afghans are offered financial reward and Iranian residency permits to join the fight in Syria.

According to Track Persia, there is also evidence of Tehran covertly recruiting hundreds of Afghan Shi’a inside Afghanistan. Fifteen percent of Afghanistan’s population are Shi’ite with religious links to Shi’ite-majority Iran.

The IRGC considers the Afghan fighters “cannon fodder,” Alfoneh says, and have little training to face exposure on the battlefield.

Defectors from the Fatemiyoun Division, who reportedly fled to Turkey and Greece alongside Syrian refugees, said In interviews with BBC Persian that they received two or three weeks of IRGC training in Iran prior to deployment in Syria.

Ahmad Shuja, a former Afghanistan researcher for Human Rights Watch (HRW), says the Fatemiyoun fighters say they are not deployed in urban areas to keep the peace or safeguard the holy shrines they are purportedly there to protect. “They are always out in the desert, fighting the tough fight, and taking high casualties,” says Shuja, who has been speaking to their fighters since 2016.

There are not exact figures on the number of Afghans killed in Syria, and although Iranian media regularly report on their funerals, but offer few details about their deaths. However, the head of Iran’s Foundation of Martyrs said in November that more than 1,000 fighters, including Iranians, Afghans, and Pakistanis, deployed by Iran to Syria have been killed.

Alfoneh says that at least 656 Afghans have been killed in combat in Syria since September 2013, based on the number of funerals held for Afghan fighters in Iran, He says that this figure is “disproportionately high.”  Continuing, Alfoneh says the Fatemiyoun Division has suffered a “catastrophic attrition rate” far higher than Tehran has acknowledged, which is at least 20 percent of the total force. He says that a total of 15,000 Fatemiyoun fighters have been deployed in Syria since the beginning of the Syrian conflict in 2011.

Shula says, “Fatemiyoun fighters have been an integral part of the plan to relieve pressure on Assad’s forces.”