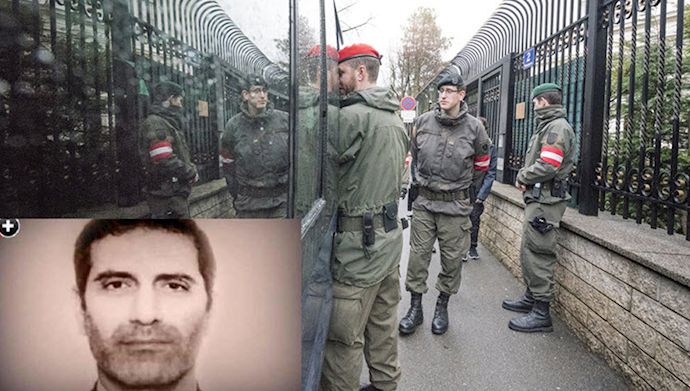 by Navid  Felker
Belgian authorities arrested a married couple of Iranian origin on June 30 after finding that they were in possession of a powerful explosive that they intended to carry to Paris to bomb the Free Iran gathering that was organised by Iranian dissidents.

The couple, Amir Sadouni and Nasim Naami, pretended to be supporters of the People’s Mojahedin Organization of Iran (PMOI/MEK), the main group of the National Council of Resistance of Iran (NCRI), but they were actually operatives for the Iranian Ministry of Intelligence and Security (MOIS), who were sent to attack the Resistance.
Shortly after their arrest, German authorities arrested Iranian diplomat Asadollah Assadi, who worked at the Iranian embassy in Vienna, but was also an intelligence operative. He supplied the couple with the explosives.
Had their plot been successful, who knows what would have happened to the 100,000 Iranian Resistance supporters at the rally, including many prominent political figures from around the world. Thankfully, the Regime’s plot was foiled, but what led them to this?
Well, it seems clear that the Iranian Regime chose to target the Resistance to undermine their fights for freedom and halt the significant growth in international support.
Since December, we have seen incredible levels of protest on the streets of Iran, which have been encouraged by the NCRI. These protests started over economic problems, but soon blossomed into an anti-regime message.
In March, Maryam Rajavi, the President-elect of the NCRI, encouraged the protests and called on the Iranian people to do more to make this “a year full of uprisings.” The people more than responded, with clear chants “death to the dictator,” a direct reference to Supreme Leader Ali Khamenei.
The message of these protests was underscored at the Free Iran Gathering and the Regime wanted to stop that message from getting out across the world.
The Regime wanted to distract the world from the growing protests by having them focus on a terror attack, that the Regime has since blamed on the NCRI despite clear evidence to the contrary. US Secretary of State Mike Pompeo recently said that Iran is using its European embassies to stage terror attacks and encouraged Europe to expel Iranian diplomats, a move which the NCRI supports.
This would not only safeguard European security, but would also bolster the Iranian Resistance movement inside Iran and throughout the world as they get ever closer to regime change in Iran.