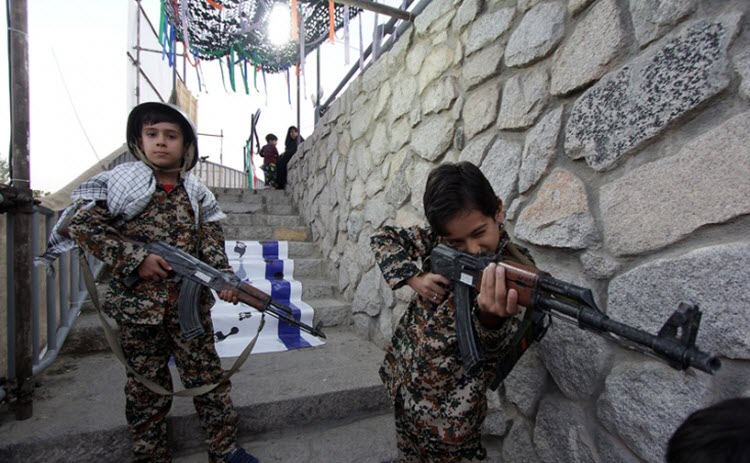 The Iranian regime is in the midst of a new recruitment campaign via the Basij force – one of its paramilitary militia groups. Video clips are shown on state media. Children as young as eight years old are encouraged to see the US and Israel as enemies. They are taught to oppose Western values too.

The National Council of Resistance of Iran (NCRI) has translated one of the promotional clips. The title is “Martyrs who defend the sacred shrine”.

“Let us rise up to save the sacred shrine.

… I have a warrant from the [Imam Ali] to defend the sacred shrine.

On my leader [Ali Khamenei’s] orders I am ready to give my life.

The goal is not just to free Iraq and Syria;

My path is through the sacred shrine [in Syria], but my goal is to reach Jerusalem.

… I do not regret parting from my country;

In this just path I am wearing my martyrdom shroud.

… From Mashhad [north-east Iran], I will walk on foot to Damascus.

I am like the bird who flocks to the sacred shrine.”

The Iranian regime often refers to the United States and Israel as “the Great Satan” and “the Little Satan” respectively and incites hatred for these who nations with anti-American and anti-Semitic messages.

At a theme park named “City of Games for Revolutionary Children” in the city of Mashhad, children are trained to fight against these nations by shooting at flags and models of the Prime Minister of Israel.

Israel National News reported: “After registering, children don military uniforms and split up into groups of 8-10. They are accompanied by a ‘commander’ whom they pledge to obey. They then go through 12 activity stations, which include simulations of the Iran-Iraq war, a ‘Revolution chamber’, defending various holy shrines, and traversing a minefield with barbed wire. Along the way, they are told about the directives of the Imam (Ayatollah Ruhollah) Khomeini and Supreme Leader Khamenei.”

Hamid Sadeghi runs the theme park. He said: “One of [our] cultural experts guides the children at the City of Games. First they are brought into the stations of the Ghadir [Shi’ite holiday honoring Imam ‘Ali’s succession to the Prophet Muhammad] and of the Lovers of Ahl Al-Bayt [the family of the Prophet Muhammad descended from ‘Ali], and [the guide] explains to them about the Mahdi [the Shi’ite messiah]. Then they reach the station of the Rule of the Jurisprudent [Velayat-e Faqih], and then the station of the Revolution, where the guide explains about the Islamic Revolution …An explanation is also provided about the directives of the Imam [Ayatollah Ruhollah] Khomeini and [Supreme] Leader Khamenei.”

He said that the aim of the theme park was to teach children about fighting and to show them how to deal with global issues in a fun way.

However, the United Nations has pointed out that Iran is breaking the law. It said: “Human rights law declares 18 as the minimum legal age for recruitment and use of children in hostilities. Recruiting and using children under the age of 15 as soldiers is prohibited under international humanitarian law – treaty and custom – and is defined as a war crime by the International Criminal Court. Parties to conflict that recruit and use children are listed by the Secretary-General in the annexes of his annual report on children and armed conflict.”